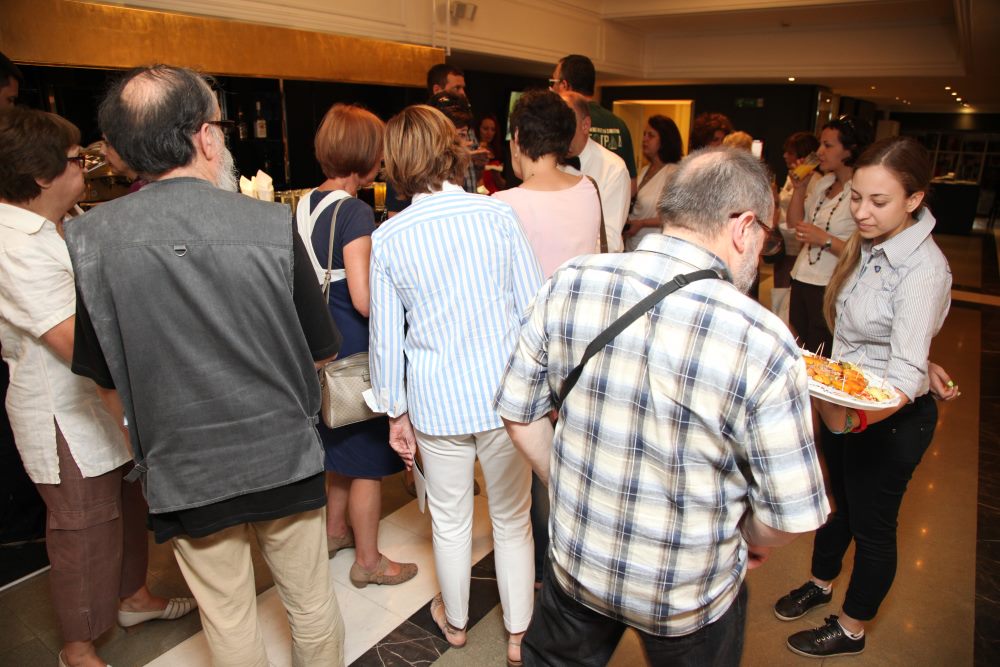 On occasion of ending the 145th season, the press conference to sum up the results for the previous nine months took place in the National Theatre’s Museum, on Tuesday 24th June.
Mr. Dejan Savić, Acting General Manager of the National Theatre, addressed representatives from numerous press and electronic media. Mr. Savić assessed that the National Theatre has had another successful season.
“We are very satisfied and we may be proud with the previous season. All planned drama, opera and ballet premieres were realised. We have participated in numerous activities supported by the Government and the Ministry, we have participated in many festivals and there were numerous tours in the country and abroad”, said Mr. Savić and reiterated that the total number of people who saw performances is around 135,000.
He mentioned the following events of the season: recent tour of the Globe Theatre, 18 June, with which the National Theatre joined celebration of 450th anniversary of Shakespeare’s birth; the premiere of Nušić’s comedy A Member of the Parliament, directed by Saša Gabrić.
Savić also spoke very appreciatively about the last drama premiere in the season, Mother Courage and Her Children by Brecht, directed by Ana Tomović, and said that is a “successful production, which stirs a lot of interest”.
”Opera Company has produced The Flying Dutchman and, after 36 years of intermission, brought Wagner back on our stage. There were also operas Tosca and In hoc signo…the latter one was performed at the closing event of the celebration programme of 17 centuries since the Edict of Milan. Ballet Company had one brilliant premiere, which brought The Nutcracker back on our stage”, said Savić and reminded that the National Theatre is renowned and dedicated theatre that gives about 600 performances a year.
When the financial situation is concerned, the National Theatre has currently 8,600,000 dinars on the account from its own proceedings and 21,600,000 dinars on its budget account.
“If we tally credits and debts, it turns out that we have over four million positive balance”, said Mr. Savić.
He added that he spoke with the newly elected President of the Managing Board of the National Thatre, Mrs. Jelena Kajgo, and assessed that they “agreed and understood each other regarding numerous things.
"I believe and hope that we will establish a successful cooperation in future”, said Mr. Savić.
He emphasised that the National Theatre’s programme orientation “must present programme for every taste, just like the National Museum.
"The National Theatre is the corner stone of our culture and we are determined to maintain its programme quality and all other qualities of the Theatre. The Theatre shows productions of all genres, all movements, featuring artists of different nationalities… I am absolutely convinced that one must explore and I have always said that we have to give a chance to young people and new expressions. However, it shouldn’t be a dominant thing, because it could impede normal functioning of the National Theatre. We have to keep in mind that there are specialised theatres engaged in alternative performances… As Jiri Menzel once said, the National Theatre has to be that kind of place that a person, who comes in for the first time, says to himself “I like this”. Because, let me say again, the National Theatre is not only the house of art and creation, it is also the education element of society”, added Savić and announced that one of priority goals in future will be to win new audiences, because Serbian theatres are visited only by 30% of total population in the country.
M.B.

THE NATIONAL THEATRE IN BELGRADE, SEASON 2013/14

• The Lady of the Camellias, 1 October 2013
• The Serbian Trilogy, 22 November 2013
• A Member of the Parliament, 31 May 2014
• Mother Courage and Her Children, 1 June 2014 (within the Celebration Programme of the First World War Centenary; the production was done with the support of the Cultural Centre Pančevo)

REVIEW OF NUMBER OF PERFORMANCES AND NUMBER OF VIEWERS IN SEASON 2013/2014:

58 performances in the National Theatre for 21,036 viewers – the company did not go on tours.

47 performances in the National Theatre for 17,073 viewers
1 performance on tour for 478 viewers
Total of 48 performances for 17,551 viewers

OTHER EVENTS (performances on tour, concerts, formal events)
A total of 56 programmes for 13,497 viewers

PARTICIPATION IN FESTIVALS AND REVIEWS

OTHER TOURS OF THE DRAMA COMPANY

MUSEUM OF THE NATIONAL THEATRE

• Mira Stupica – Actress of the Century (on occasion of 90th birthday of the famous actress and principal artist of the National Theatre in Belgrade), author Ksenija Šukuljević Marković, 23 September 2013
• Biserka Cvejić – Verdi’s Heroine (on occasion of 90th birthday and 35 years of teaching career of the prima donna), author Dragan Stevović, 9 December 2013
• Mija Aleksić – To Be an Actor (on occasion of 90 years since the birth of Milosav Mija Aleksić), author Boban Stefanović, 3 March 2014
• Aleksandar Bugarski – Builder for Kings (exhibition about life and work of the architect who designed the old building of the National Theatre and other buildings in old Belgrade), author Marija Kuzminac, 7 June 2014 – within the event The Night of Museums

INTERNATIONAL AGREEMENTS ON COOPERATION
• The National Theatre signed the Protocol on Long-Term Cooperation with the Music-Drama Theatre Surgut from Russia, 2 February 2014

• Unveiling of Mija Aleksić’s bust in the Second Gallery foyer, 26 September 2013
• Gala Concert – Russian Ballet Stars, tour of the Ekaterinburg State Academic Opera and Ballet Theatre, 30 September 2013• The Nineteen-Fifteen – The Tragedy of a Nation, tour (a joint production of the National Theatre in Niš and the Cultural Centre “Vuk Karadžić” from Loznica – on occasion of central programme of state’s celebration of Vidovdan, 100 years since the beginning of the First World War), performance on the Main Stage, 10 November 2013
• Giuseppe Picone, international ballet star, guest performer in La Bayadere, 12 November 2013
•  The National Theatre just before the First World War, exhibition on occasion of The Serbian Trilogy’s premiere, the exhibition is being presented on occasion of every performance of the production in the Theatre and on tour; author Ana Tomić; opened on 20 November 2013
• Cruise with Marina on “Boat 3 in 1”, series of concert performances for children and parents, several times during the season – with different programmes
• Music for Health, benefit concert by Opera soloists and “Edit” String Quartet on the World AIDS Day, 1 December 2013
• To the Professor with Love, concert on occasion of 90th birthday and 35 years of teaching career of prima donna Biserka Cvejić, 9 December 2013 • Eternal Verdi, concert of opera arias on occasion of 200 years since the birth of Giuseppe Verdi, 13. December 2013
• New Year’s Gala Concert, 13 January 2014
• Shakespeare: Sonnets, on occasion of 450 years since the birth of William Shakespeare, 27 February 2014
• Benefit Concert Dedicated to Fighting Cancer, by Opera soloists, 12 March 2014
• Presentation of “Žanka Stokić” Award to Mrs. Mira Banjac, 22 March 2014
• Kyogen: The Snail (Kagyu) / Deception Rhythm (Jobikoe), tour of the Okura School, Public Nogaku Association from Japan, 22 and 23 March 2014
• Opera and Poetry Evening in the Honour of Shakespeare, 27 April 2014
• Growing up in Opera, concert by the “Borislav Popović” Opera Studio, 29 April 2014
• From Rossini to Mascagni, opera concert featuring guest artists from Italy (conductor Gianpaolo Mazzoli and baritone Domenico Balzani), 10 May 2014
• Benefit Gala Concert by the Korean National Ballet Company, 22 and 23 May 2014
• Solo Concert by Sanja Kerkez, 29 May 2014
• Hamlet – Globe to Globe, tour of the Globe Theatre from London, 18 June 2014
• Maria Papaioannou, soprano (Cyprus) – guest performance in opera Madama Butterfly, 19 June and Tosca, 21 June 2014
• Lorenzo Coladonato, conductor (Italy) – guest performance in opera Madama Butterfly, 19 June 2014
• Concert by “Borislav Popović” Opera Studio, 22 June 2014
• Gala Concert by soloists, Orchestra and Choir of the National Theatre, 29 June 2014

The Opera Company of the National Theatre have introduced a new practice last season – they organise a programme “Welcome to the Premiere” for journalists and audience before every new premiere. 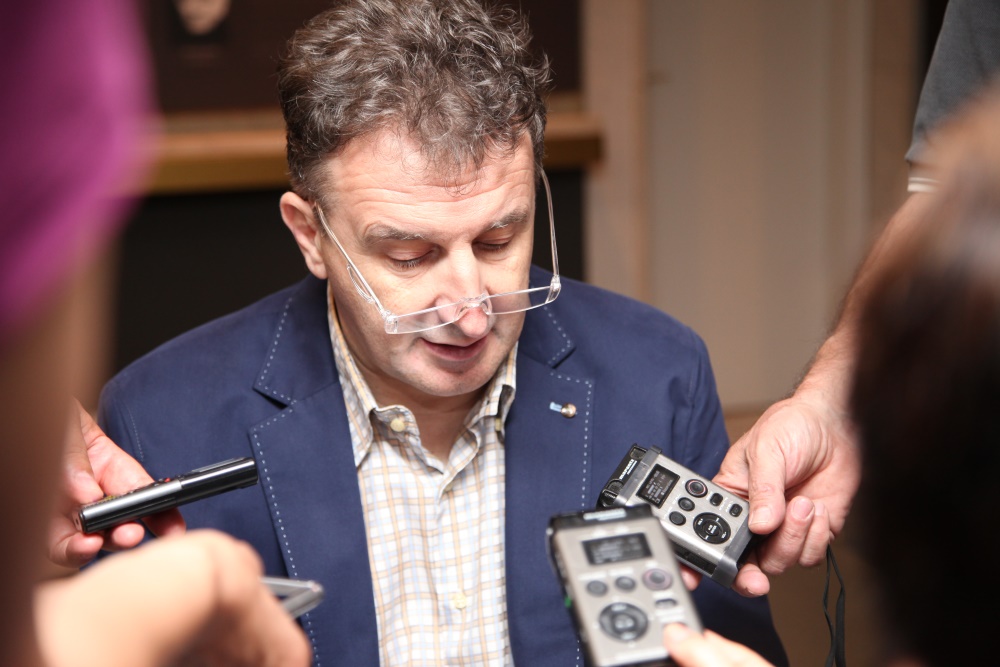