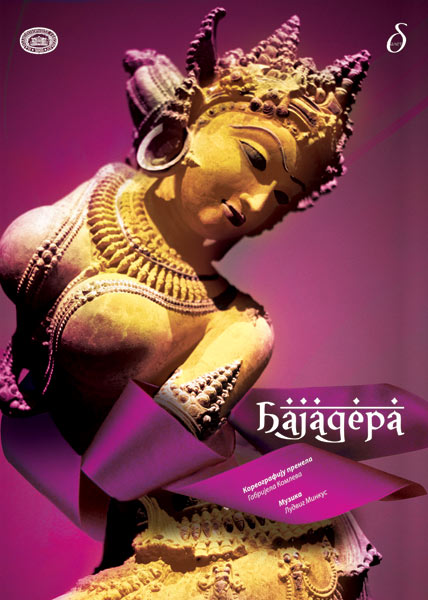 A VOYAGE TO INDIA
A travel diary by Pierre Sonnerat  dating from 1782 is one of the earliest documents that gives account of bayaderes , dancers in Indian temples especially in the area of Surat.  The expression bayadere comes from Portuguese – Bailadeiras, which means dancers. Bayaderes were famous for their dancing and singing in sacral processions to honour gods. Girls used to devote themselves to this profession in early age, before getting married. They were trained to dance from the moment they entered into the service of Brahmins, the high priests in Indian pagodas. The profession of a bayadere was highly esteemed and popular at the time in India.

THE MYTH OF A BAYADERE
The ballet can also be called The Voyage through Ancient India or The Romantic Myth of Bayaderes. Distant colourful culture offers a fantastic ideal of a female musician, dancer and seductress in a far away and exotic religion. It is no wonder that it was the nineteenth century India that offered a perfect background for a romantic myth of beautiful and emancipated young women, who did not deprive men of their beauty, as opposed to inaccessible women belonging to high castes. The most interesting part of it was that it was all in full concordance with ancient traditions and religious canons. Is not that the male dream, eternal, essential and humane? The nineteenth century Paris, which yearned for moral liberation, imagined India as a land of numerous kingdoms of fakirs, ascetics, maharajas and tigers, as well as a land of lavish palaces and pagodas and, most of all, the place of origin of bayaderes. The very word “bayadere” introduced turmoil and stirred up the spirits. There were numerous travellers, novelists and librettists who spoke of their “lascivious dance to strange and doleful music, danced in palaces as in legends…” In 1830, Victor Jacquemont boldly stated that the dance of bayaderes surpasses arabesques of Paris Opera ballerinas by far, “I still do not fully understand Indian culture, but I perceive their dance as the most attractive and most seductive in the world.” In fact, fascination with this romantic character comes from her destiny of a divine courtesan, or to the same extent, from her role of a slave to gods. “We want to see bayaderes”, could be heard in all cultural circles. Some of greatest minds of the time have been inspired by the touching myth of their slavery, for instance, Goethe wrote a poem Der Gott und die Bajadere. The influence could be noted in the world of music and opera. Imaginary Orient with its fantastic themes about demons and wonders of pleasure and barbarism has become the cliché in operatic librettos (Bayadères, Catel (1810), Lakmé, Léo Delibes (1883), Lalla Roukh, Félicien David (1862). Extravagance of strange princess who wear precious stones or a tyranny of Brahmins over under-privileged people or provocative dances of bayaderes in temples, together with new scientific disciplines studying Orient, scientists focusing on tremendous and new studies on India, all gave quite a fresh background to creation of scenic and music pieces.  When the touring company of authentic Indian Bayaderes visited Paris, with famous Amani as a principal dancer, Théophile Gautier, a ballet librettist and “a magician of perfect French language” (called so by Charles Baudelaire, edit.) wrote some of his most inspired pages and stated, “In our minds, even the very word Bayadere inspires an idea of sun, scents and beauty, ancient and human… Dance of girls, who come from the place of pilgrimage dedicated to God Vishnu, their romantic features and exotic beauty, united with strength and pure blood, have been unknown to our civilisation. This was a moment of unforgettable magic…”   One of first attempts to reincarnate the spirit of India on a European stage was an opera and ballet by Francois Auber titled Le dieu et la Bayadère  (The God and the Bayadère) in 1830. The production was created for ballerina Marie Taglioni, choreographed by her father Filippo Taglioni, and had been performed in Paris Opera for a long time. Gautier wrote a libretto for ballet Sacountala in 1849, based on the work of Indian poet Kalidasa from the fourth century; Sacountala is about a famous dancer of the same name from a forgotten Indian temple. This pantomimic ballet had a tremendous success; it was created to the music of Ernest Reyer and choreographed by Lucien Petipa, Marius Petipa’s older brother. Together with many other superb ballets of the time, it vanished from the repertoire when the new creations appeared. However, 20 years later in Sankt Petersburg, as an echo of the success, Marius Petipa started working on the ballet Bayaderka (in Russian, La Bayadère in French) with same characters as in his brother’s piece: Rajah Dugmanta, ruler of India and Gamzatti, his daughter. Bayaderka, a ballet by Marius Petipa (1877) is considered an original piece, although the most of innovations have been introduced in regards of western conventions…”Music is conditioned with many adjustments to historic context of the ballet. Minkus uses wind and percussion instruments as a “spice” to give exotic colour and sometimes uses several rhythms. What would have happened if he had to preserve the original musical instruments; there would be three hours of academic ballet with instruments from India? Marius Petipa’s ballet is actually a grand spectacle of western civilization’s art, where a choreographer expressed his sense for melodrama… Ekaterina Vazem has been so inspired, her art had no limit, her perfection was so superb that words cannot do her justice… Petipa’s great talent was that he knew what the audiences needed to see and the way they understand things. La Bayadère represents a successful union between artistic creation and audience’s expectations”. (Roland John Wiley, London)
Miloš Dujaković 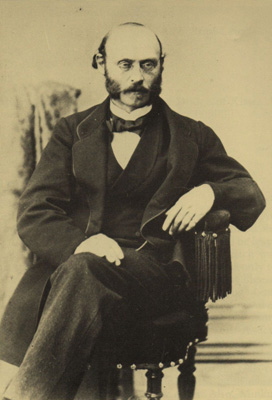 LUDWIG MINKUS
Ludwig (Leon) Minkus, a ballet composer and a violinist, was born in Vienna in 1826. He started his career in 1846 in Paris by composing Paquita together with Edward Deldevez. The piece was produced in cooperation with a choreographer Joseph Mazilier. He also cooperated with choreographer Saint-Leon; together they produced ballets La Fiammetta (1846) and Nemea (1864). Subsequently, he worked with a French composer Delibes on the ballet La Source and composed music for another two ballets with Saint-Leon: Le Poisson d’Or and Le Lys. He moved to Russia in 1853 and became a conductor of Prince Yusupov’s orchestra in St. Petersburg. He appeared as a soloist in the Orchestra of the Bolshoi Theatre from 1861-1872. At that period, he also taught at the Moscow Conservatory (1866-1872) and he was appointed the official composer of the Bolshoi Ballet (1864-1871). In 1871, he moved back to St. Petersburg and worked there until he retired in 1891. Dissatisfied with his low income he left Russia and moved to Austria where he died at the age of 91 (1917).
He composed more than 20 ballets including: Don Quixote, Paquita, La Bayadere, Roxana, Camargo, Bandits and Papillons. As a master of his trade, Minkus was well acquainted with the different styles of ballet music of his time. His music is melodious and pleasing in sound, with clear dance rhythms. 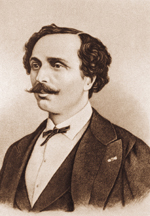 MARIUS PETIPA
Marius Petipa is one of the best known personalities of the ballet art of all times. He is the author of the classical ballet academism, a ballet style which delights audience and ballet artists with its strict, yet beautiful and virtuosic forms. Marius Petipa was born in Marseilles, in 1819. in an artistic family. Petipa started his career as a dancer, first in France, then Spain, and in 1847 he came to Russia where he stayed till his death, in 1910. At the stage of the Marynski Theatre in St.Peterburg he worked for 56 years, first as a dancer and then as a choreographer. He staged forty six original ballets, synthesizing the achievements of the ballet art of the 19th century, which he enriched with extraordinary creative imagination. His most famous ballets are: Don Quixote(1869) and La Bayadere  by Ludwig Minkus, than The Sleeping Beauty (1890) and Swan Lake (1895) by P.I.Tchaikovsky, in collaboration with Lev Ivanov, and Reymonda by A.K.Glazounov. Petipa took part in creating the ballet The Nutcracker by Tchaikovsky and Ivanov, for which he wrote libretto based on a well-known Hoffmann’s tale. Even the superficial insight into his stagings which are kept till today, brings us to the conclusion that the soloists’ sections and great classical duets are the most precious legacy that Petipa left for future generations of ballet artists. The fact is that the classical ballet is considered to be the basis of the versatile dancing education, and that the most valuable classical ballets and parts of them represent the framework of the repertoire of ballet companies throughout the world. Spectators, of course depending on the technical abilities of dancers, are always looking forward to watching them. It is clear that creative opus of Marius Petipa is of utmost importance in that. 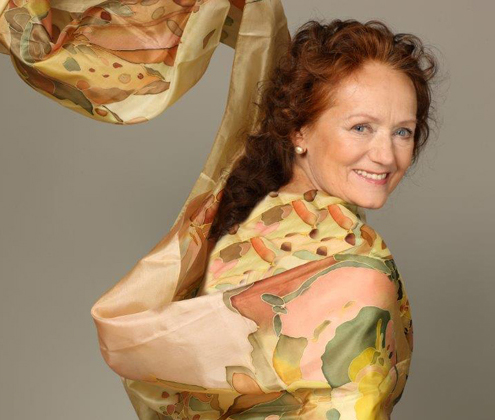 GABRIELA KOMLEVA
The legend of St. Petersburg stage, Gabriela Komleva, has finished her education at the Vaganov Academy at the St. Petersburg Conservatory with highest distinction. She was a Prima Ballerina of Kirovski Ballet, Mariinsky Theatre, in period between 1957 and 1988. She has performed the academic repertoire with great success and earned the title of Ballerina Petipa. Komleva has prepared her roles under guidance of Natalia Dudinskaya and other renowned ballet masters, such as E. Lyk, B. Shavrov, G. Ulanova and K. Sergeyev. Komleva has danced in numerous creations by Russian choreographers. In the renowned Russian Ballet Encyclopaedia, she is said to have “paved the new path in performance of modern pieces. Hers is a talent which shows generous academism, musicality, dramatic virtuosity and remarkable technique.” Since 1979, she has worked as a ballet master and a repetiteur with the Kirov Ballet (Mariinsky), with both Russian and international ballet stars. She has danced in numerous broadcasts of classical ballets in Russia and abroad. In addition, several films were made about her. Since 1987, she has been teaching at the Ballet Master and Repetiteur Department at the St. Petersburg Conservatory, where she is given a title of professor and later, in 2009, she becomes the Head of the Department. Amongst her numerous awards, the most important ones are: National Artist of the USSR, Renowned Artist of Dagestan, Winner of Russian National Award “M. Glinka” and awards from many Russian and international competitions. She has also won The Best Artist of the Year Award, The Best Artist in TV Films Award, The Best Repetiteur Award, The Best Ballet Master Award, etc. The International Biographical Institute has given her the title of  Woman of the Year on several occasions. In 1994, she becomes a Chairing Person of the Society for Preservation of Russian Classical Ballet Style in England. Of perhaps all the classics in Komleva’s career, it was her interpretation of Nikiya in La Bayadere which showed her qualities to their utmost. In 1979, BBC chose the version of La Bayadere, with Komleva in the leading role, the best musical film of the year. After a performance dedicated to the hundredth anniversary of the first performance of La Bayadere (1977), in which Komleva danced Nikiya’s role, the great Russian ballerina Tamara Karsavina sent her a card, “La Bayadere – a unique and unsurpassed ballet; I know that the grand tradition of Russian ballet school is carefully preserved in a city I cherish in my memories”.