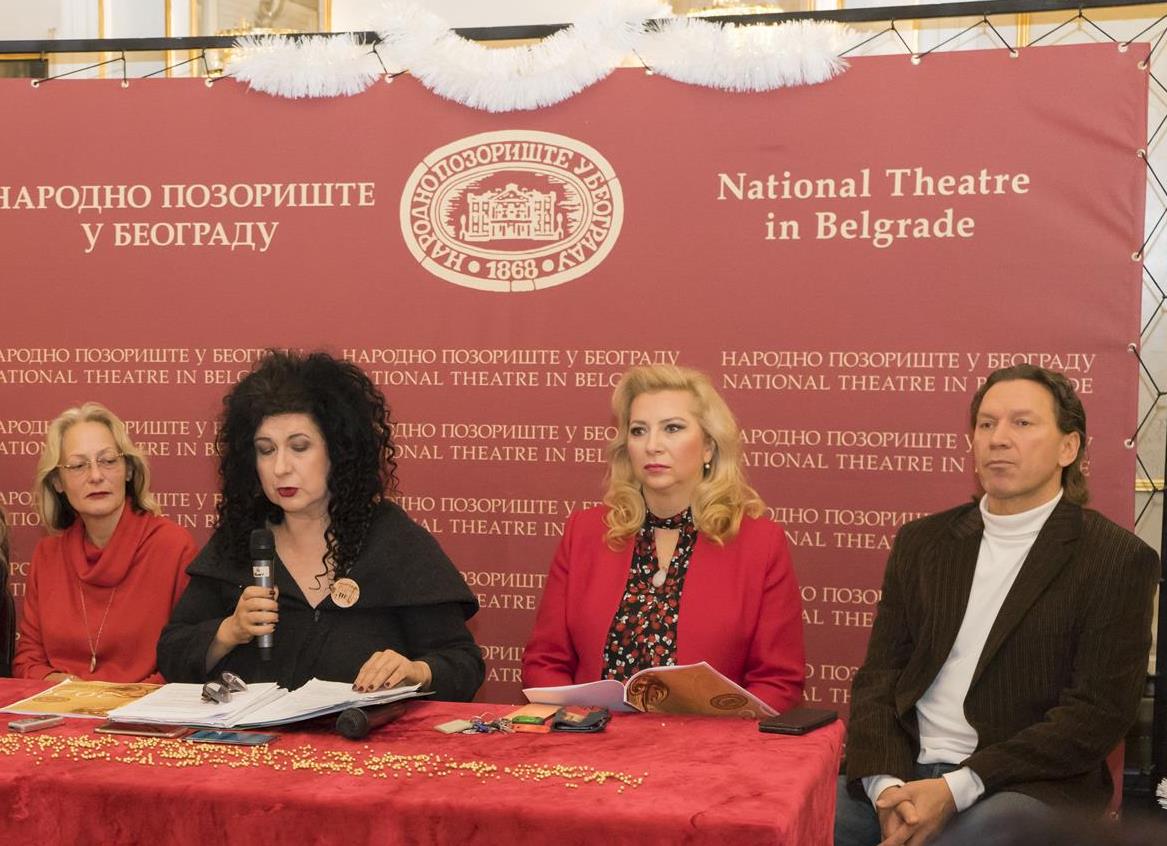 Traditional New Year’s cocktail party for representatives of media took place in the Second Gallery Foyer on 24th December. A press conference was held as well at the occasion, during which results achieved throughout the year were summarised and very ambitious plans for the following period were announced.

General Manager Ivana Vujić said that in the course of 2019, 39 awards were received and 524 performances were given for approximately 200,000 viewers. She also emphasized that there were 101 performances more when compared to the same period the previous year.

Ms Vujić recapitulated that there were four premieres in the Drama sector (Impure Blood, Are You Pro Safety?, A Midsummer Night’s Dream – Project Shakespeare and In the Darkening Green), two in the Opera (Koštana and At Dawn) and a premiere revival (Bastien and Bastienne), and one premiere in the Ballet (Swan Lake).

Vujić also stated her pleasure that a third stage of the National Theatre, named “Workshop”, was opened on 23rd April, and that public readings of plays by national and foreign playwrights were held in this venue with participation of actors, members of the Drama ensemble, who had not had a premiere in the Theatre in five or more years. She also spoke about successes of the National Theatre’s programme line, titled “Platform”, which was initiated in order to provide trainings to performing arts professionals and to educate audiences.

In addition, Ms Vujić put emphasis on Theatre’s numerous tours both in the country and abroad, as well as on the Theatre productions’ participation in 19 national and international festivals.

Among other things, Vujić also announced the National Theatre’s re-entering into membership of the European Theatre Convention which would take place in June in Graz, Austria.

When speaking of tours to the National Theatre, the General Manager pointed out the event that would take place on 26th and 27th September when the Théâtre de la Ville from Paris would tour with their performance of Mary Said What She Said, directed by the renowned Robert Wilson, who cast the main role to famous French actress Isabelle Huppert.

Prior to that, at the beginning of March, the Klagenfurt City Theatre would perform Peter Handke’s play, The Hour We Knew Nothing of Each Other, directed by Robert Schuster, followed by the tour by SNT Maribor with their performance of Bridges and Gods after Tone Patrljič’s novel, the Montenegrin National Theatre with their Ivanov by Anton Pavlovich Chekhov, and there is a plan to arrange the Russian Theatre of Nations’ tour, with Chekhov’s play Uncle Vanya…

“We are under negotiations with the renowned fashion designer, Jean Paul Gaultier, who made a play about his life. We are working to have the Fashion Show Jean Paul Gaultier performed at the National Theatre’s stage,” Ivana Vujić reveals.

According to Ms Vujić, the Drama Ensemble of the National Theatre would tour the CNT Zagreb after a 38 year-long hiatus (with Mrs Cabinet Minister’s Wife on 19th January), Impure Blood would be performed in the SNT Maribor, there are negotiations to have Balkan Spy tour Canada and New York, as well as negotiations regarding exchange of performances with the Alexandria Theatre.

Vujić said that the National Theatre would be very active in the future and present at numerous significant European festivals, as well as at several regional ones (Ohrid Summer, Mostar Liska, etc.).

Ms Vujić revealed that one of the ideas was to implement a project titled “The Secret of the National Theatre” in the course of 2020, in which artists from the three ensembles would be hosts for visitors and speak about their respective professions, reply to visitors’ questions…

“The whole Theatre would be a sort of a labyrinth in which the visitors would never know who would greet them around the corner and whether the theme would be from the sphere of drama, opera or ballet,” said Ivana Vujić.

When the repertoire of the Drama is concerned, after the premiere of Camus’ Caligula directed by Snežana Trišić with Igor Đorđević in the title role at the Main Stage on 5th February, there is a plan to stage Wolves and Sheep by Nikolai Ostrovsky directed by Egon Savin, followed by Chekhov’s The Seagull directed by Jagoš Marković, Tolstoy’s War and Peace directed by Boris Liješević, The Theatre of Illusion by Pierre Corneille directed by Nikola Zavišić, then Madame Bovary by Gustave Flaubert dramatized and directed by Tanja Mandić Rigonat, and The Teacher written and directed by Siniša Kovačević…

There is a plan to stage a piece by Dobrica Ćosić at the Main Stage, negotiations are underway with his daughter Ana.

It was also announced that Storm Still, a play by the Nobel Prize laureate Peter Handke, translated by Žarko Radaković, is being considered and that the Theatre expects a commissioned text from Milovan Vitezović on St. Sava which would be directed by Ana Grigorović.

There is an announcement that a joint production with the Belgrade Culture Centre, Night Diary, a play by Jan Fabre, would be performed by a principal of the Drama, Slobodan Beštić, at the “Raša Plaović” Stage on 22nd February.

There is an agreement for a minority joint production with the Bremen Theatre for Life and Fate, based on the historical novel by Vasili Grossman, which would be directed by Armin Petras, and there are plans to stage plays Vassa Zheleznova by Maxim Gorky directed by Zlatko Sviben, and Orlando by Virginia Wolf directed by Bojan Đorđev…

The Opera of the National Theatre has been preparing Puccini’s Manon Lescaut as a joint production with the Madlenianum Theatre; the premiere will take place on the Main Stage on 26th February.

There are plans to stage operas Prince Igor, The Capulets and the Montagues, opera performances for children… The important jubilee – 100 years since establishment of the Opera will be celebrated with a performance of Puccini’s Madam Butterfly on 11th February; the opera was the first performance given by a newly formed ensemble of the Opera of the National Theatre on the same date exactly one hundred years ago.

Among other things, it was announced at the press conference that the Opera of the National Theatre would tour South Korea for the first time.

“The manner the tour will be organised is magnificent. The Korean Opera from the City of Daegu will perform Koštana, an opera by Petar Konjović. Our conductor will leave for Korea earlier on to prepare their Orchestra and Choir. The Choir will sing in Serbian. Soloists of the Opera of the National Theatre will perform in this production as well. We expect to have this performance on 13th June,” announced Ivana Vujić.

She said that the same model would be used in October for the tour performance of Korean opera Infinite Love at the Main Stage in which the National Theatre’s Orchestra and Choir would perform under a baton of a Korean conductor with soloists of Korean National Opera.

The Ballet ensemble of the National Theatre plans to produce two premieres in 2020, Michelangelo and Ohrid Legend.

“All the things we announced today demands certain funding. We will give our best to secure the funds. This is our grand and very ambitious plan, but we are a big theatre. I believe that hard work needs to be our basic characteristic,” concluded Ivana Vujić. Directors of all three companies of the National Theatre (Drama, Opera and Ballet), Molina Udovički Fotez, Jasmina Trumbetaš Petrović and Konstantin Kostyukov, attended the press conference, as well as the Director of the Museum, Dragan Stevović. 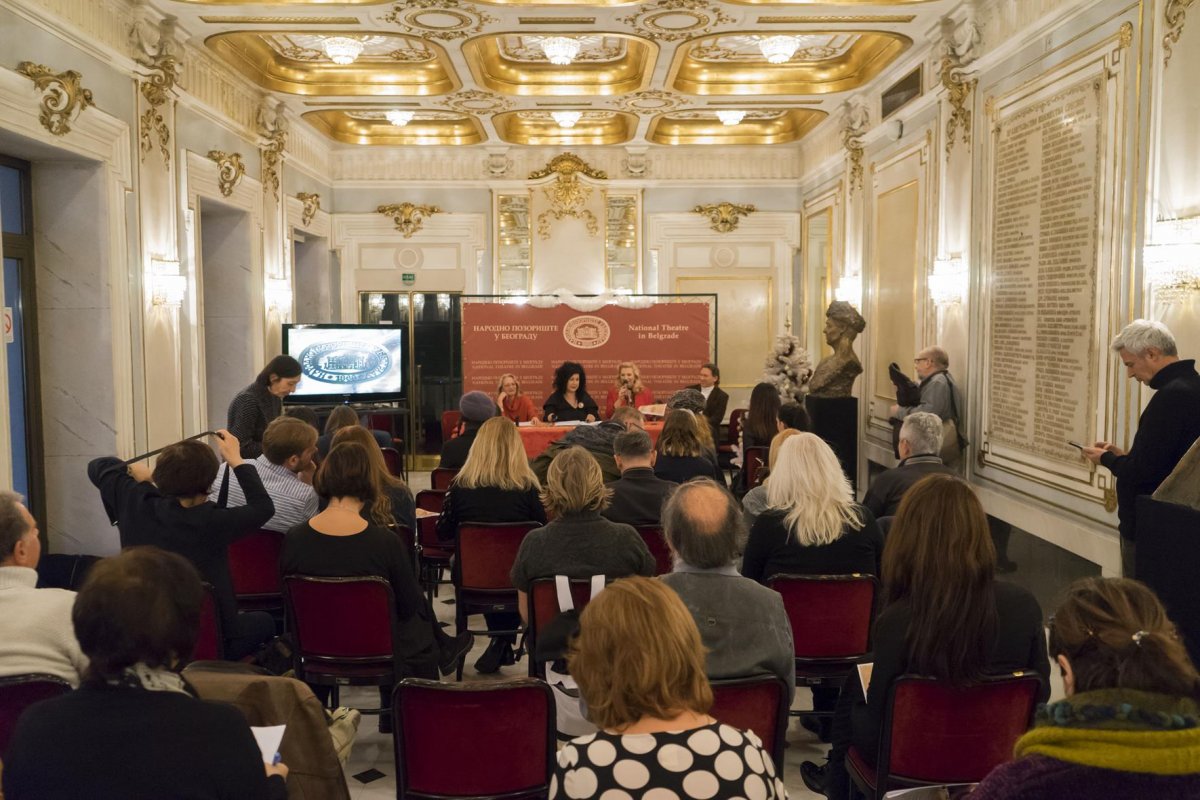 Agreement on Cooperation Signed with the Klagenfurt City Theatre

Memorandum on Cooperation with Slovene National Theatre from Maribor