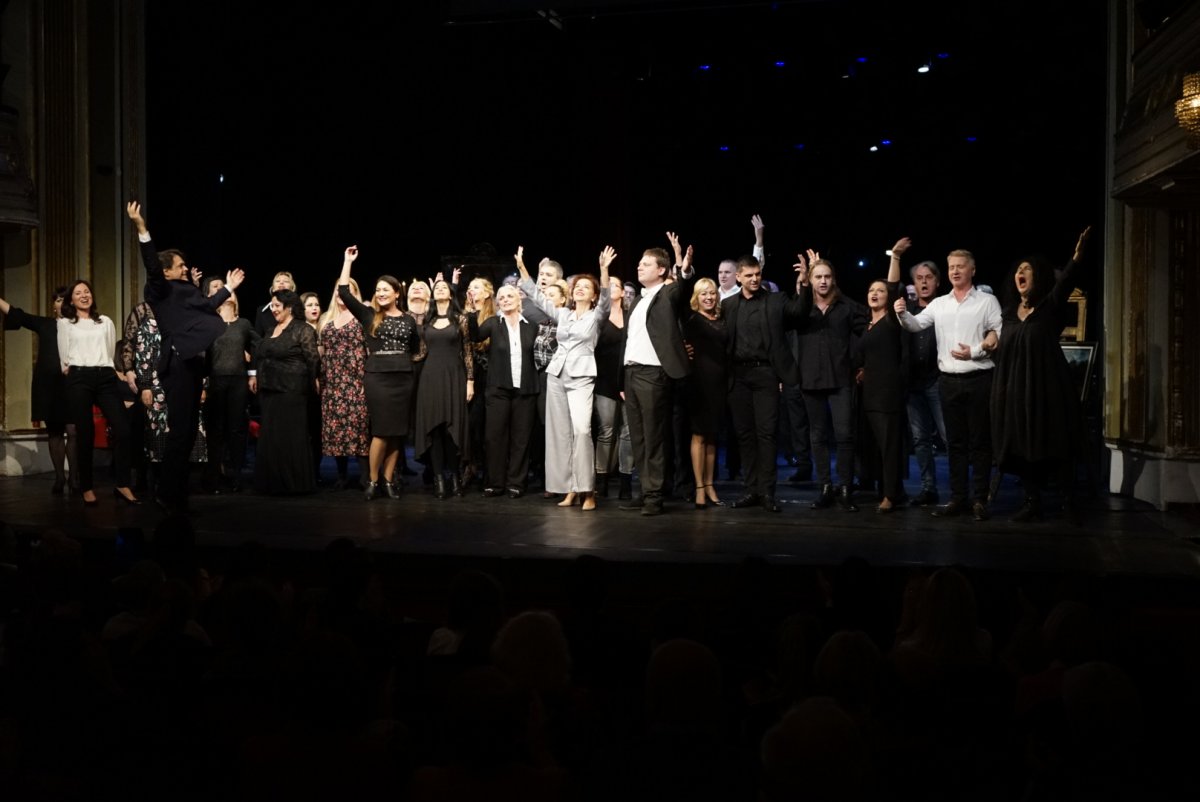 On 22nd November, the National Theatre in Belgrade celebrated its 151st anniversary with a formal program titled To Burn with the Fire of Apollo, within which traditional awards were presented and reviews of seven premieres and one revival were given, as well as the reviews of numerous recognitions and tours that took place during the previous year and a reiteration on history of the theatre.

A scene from ballet Dictionary of the Khazars – Dream Hunters, directed by Ivana Dragutinović Maričić after the script by Branislava Ilić, opened the program of the celebration, followed by an account of how theatre life in the new building started a century and a half ago.

After the opening, the General Manager, Ms Ivana Vujić addressed the people in attendance, “Friendship is remarkable, and at the same time I am happy to serve hundreds of great artists and thousands of viewers who come to the National Theatre. To burn with the fire of Apollo, the god of poetry, art and light, is a privilege. In Maxim Gorky’s The Lower Depths, a character Baron keeps repeating a line ‘I had a gold carriage, carriage of gold I had’. I thought a lot about that line – were those carriages truly golden, a sign of riches, or were they something else? No, he said, ‘I used to have light within, imagination, youth, silliness, unfeasibility, fire, I had it all, I burned with the fire of Apollo.’ All the people who represent the National Theatre, those who work for the Theatre, those who are associates, those who look at it, those who pass by it, those who hear about it, those who don’t have good opinion about it, those who have good opinion about it… all of them deserve to burn with the fire of Apollo until the end. One should burn until the very end and then the fire gets immense.”

The General Manager then spoke about successes of Balkan Spy at numerous festivals in the country and abroad, and about successful performances produced by Drama, Opera and Ballet departments during the course of this year.

When speaking about the previous 12 months, since she has been the head of the National Theatre, she said that they have been most important period in her short life so far, and added that she plans to live for 126 years.

“I wish the same for you with all my heart. I am thankful to great artists, magnificent audiences, each individual, their kindness and their devils within. I bow to them. Last year I said that I came to serve and this year I promise, to all of you, that I will try to serve to the best of my abilities. I am interested exclusively in the job and service, nothing else”, said Ivana Vujić and then she asked the people in attendance if they want to burn with the fire of Apollo.

After getting an affirmative answer to her question, she lighted a glove covered in pyrotechnic solution on the candle, brought by an assistant, on her right hand and received a strong applause from the audience.

“And now, I burn with the fire of Apollo literally. If we burn until the end then our artistic flame will be tremendous”, said the General Manager of the National Theatre.

When the program continued, hosted by drama artists Nebojša Kundačina and Danijela Ugrenović, an outline and a film, edited by Petar Antonović, about premieres during the previous year were presented; there were seven premieres, four in the Drama department (Impure Blood, Are You Pro Safety?, A Midsummer Night’s Dream – Project Shakespeare and Meadow of Darkness), two in the Opera department (Koštana, At Dawn), as well as a revival of children’s opera Bastien and Bastienne, and one in the Ballet department (Swan Lake).

Numerous tours in the country and abroad were mentioned, as well as participation in more than twenty festivals and numerous collective and individual awards that were won.

In addition, the following achievements were mentioned, continuation of cooperation with the Royal Dramatic Theatre “Dramaten” from Stockholm, tours of CNT from Zagreb after 38 year long pause, as well as the signed Protocols on Cooperation with the Deutsches Theatre, National Theatre in Budapest, Opera from Algiers, Drama of the SNT from Ljubljana and Opera & Ballet of the MNT from Skopje.

A moment of silence was dedicated to honour people who passed away since the previous Day of the Theatre, principal of the Drama Marko Nikolić, soloist of the Ballet Olivera Gavrilov Stoiljković, retired actor Bogoljub Dinić, retired stage manager Predrag Perović and principals of the Opera Nikola Mitić and Aleksandar Đokić.

After reiteration regarding establishing of Acting School in the National Theatre, on 16th December 1869, it was said that the Theatre, since its very beginnings until today, has been dedicated to young people and has been implementing various types of training of professionals. With that in mind, at the initiative of General Manager Ivana Vujić, a program line “Platform” was initiated, within which several important programs were realized in order to provide further training of professionals in the sphere of performing arts during the previous year.

A third stage named “Workshop” was opened and five public readings of dramas were held since 23rd April in this venue. Furthermore, there were four exhibitions in the Museum of the National Theatre in the course of previous 12 months. For the first time on the Day of the Theatre, certificates were presented to members of the “Borislav Popović” Opera Studio.

95 Public Commendations for achievements of outstanding and special importance for successful functioning of the National Theatre in Belgrade for season 2018/2019 were presented, as well as traditional Golden Badges for 20 years of career and Charters for newly retired staff.

Seal of the National Theatre, awarded as per the General Manager’s decision for outstanding contribution to functioning of the National Theatre, were awarded this year to Raško Jovanović, Expert in Theatre Studies and founder of the Opera & Theatre Madlenianum Madlena Zepter; Sergei Polunin, Choreographer and international ballet artist; Radmila Smiljanić, Principal Singer of the Opera; Ana Ilić, Senior Advisor to the Prime Minister of the Republic of Serbia for Creative Industries; Konstantin Kostyukov, Choreographer and Principal Dancer of the Ballet; Ljiljana Blagojević, Principal Actress of the Drama; Nebojša Dugalić, Principal Actor of the Drama; Olivera Živković, Public Relations Officer and Janko Sinadinović, Principal Singer of the Opera.

As per the decision of the Managing Board, the Award of the National Theatre for best individual premiere artistic accomplishments within the repertory of the National Theatre in season 2018/2019 were awarded to actress Jovana Stojiljković (Sofka in Impure Blood), actor Nenad Jezdić (Marko, Impure Blood), principal of the Opera Miodrag Jovanović (Mitke, Koštana), conductor Ana Zorana Brajović (Koštana), opera singer Evgenija Jeremić (Koštana, Koštana and Stana, At Dawn) and soloist of the Ballet Tatjana Tatić (Odette/Odile, Swan Lake).

Awards of the National Theatre for outstanding overall artistic and work achievements this year were awarded to Nela Mihailović and Nataša Ninković, Principal Actresses of the Drama, as a joint award, and to Jovan Tarbuk, Graphic Designer.

The Plaque of the National Theatre, as per the decision of the Managing Board, for significant effort in functioning of the Theatre were awarded to Radmila Živković, Principal of the Drama and to the Auto Centre “Lady F-LF”, certified Nissan vehicles dealer, a dealership which provided a vehicle to the National Theatre free of charge.

The crown event of the celebration, as always, was presentation of the “Raša Plaović” Award for Best Actor in Belgrade theatres for period since the previous Day of the Theatre; the Award was presented to Nenad Jezdić for his interpretation of Marko in Impure Blood.

The unanimous decision was reached at the meeting of 18th November by a jury of professionals chaired by Igor Bojović, a playwright, while the members were Snežana Trišić, stage director, Ljiljana Blagojević and Nela Mihailović, actresses, and Tamara Baračkov, dramaturge.

The elaboration of the jury’s decision, read by Bojović, indicates that the competition this year was strong and that their task has not been an easy one.

“Nonetheless, Nenad Jezdić’s interpretation stood out among others; he built a strong and impressive character of Landlord Marko with expressive, authentic and styled interpretation. Jezdić was successful in expressive interpretation, without using naturalistic tone for a single moment, in order to emphasise the complexity of Stanković’s character, as well as to emphasize multifariousness and ruptures of a man from a patriarchal background. By creating complex and layered relationships with all actors on stage, Jezdić created an inspirational interpretation with lavish nuances of emotion, but also featuring the brutality of mindset and tradition at the time. With immense skill, Nenad Jezdić has created and shaped a character, which belongs to our classical literature, in a contemporary manner, thus presenting an individual we are able to recognise in today’s society”, was stated in the Elaboration of the Jury’s Decision.

Stage Director Nešković accepted the Award instead of Jezdić, who was not able to attend the formal ceremony due to his previously scheduled professional obligations.

Nešković read Jezdić’s letter in which he stated that he is proud to be the recipient of that “wonderful award” and that he regrets not being able to receive it in person; he reiterated that he went through a wonderful process of creation by “working on a wonderful text, in a wonderful theatre, with wonderful colleagues” while preparing the role of Marko.

During the program, the Choir of the Opera performed Chorus of the Hebrew Slaves from Nabucco and The Gypsy Chorus from Carmen, while the Ballet company performed the Tango from Who Is Singing over There?.

On the occasion of the Day of the National Theatre, a promotion of books by Professor Predrag Bajčetić, A Sermon by Silence and Histrionics and Today, was held on the “Raša Plaović” Stage in the evening.

The following participants took part in the program, Dr Petar Marjanović, Svetozar Rapajić, a Professor Emeritus at the FDA, Ivana Dimić, a writer and a playwright, and Dejan Mijač, a stage director, while the moderator of the program was Slobodan Beštić, principal of the Drama of the National Theatre in Belgrade.

Predrag Bajčetić (Belgrade, 22 May 1934 – Belgrade, 30 May 2018) was a renowned Serbian director, actor, producer and Professor of Acting at the Faculty of Dramatic Arts in Belgrade.

Day of the National Theatre in Belgrade, 22nd November, was established in 1968, during the celebration of centennial of the theatre.

Namely, on that day, 151 years ago (in 1868), the first performance of the newly-founded National Theatre in Belgrade took place; it was Đurađ Branković by Karolj Obernjak, and it was performed in “At the English Queen’s” Inn.

The first performance in the newly constructed building of the Theatre was After Death Fame of Prince Mihailo by Đorđe Maletić, which took place on 30th October 1869.
M.B. 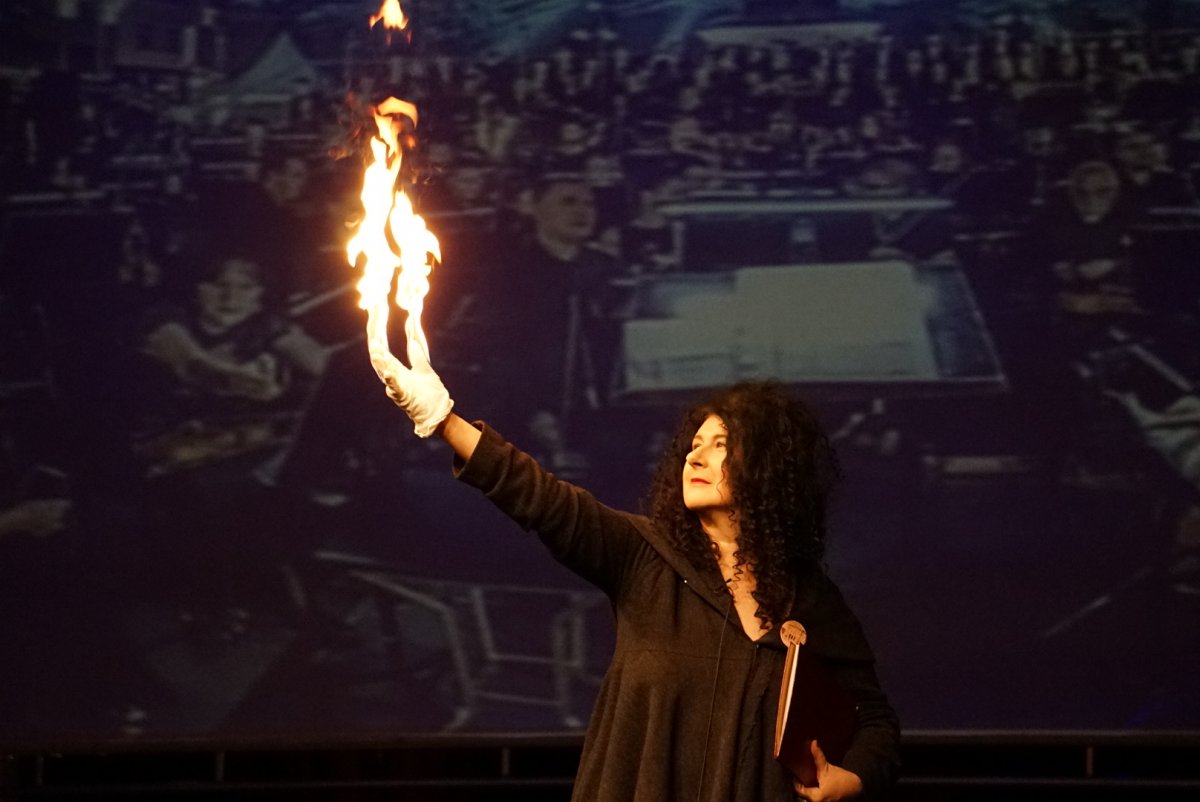