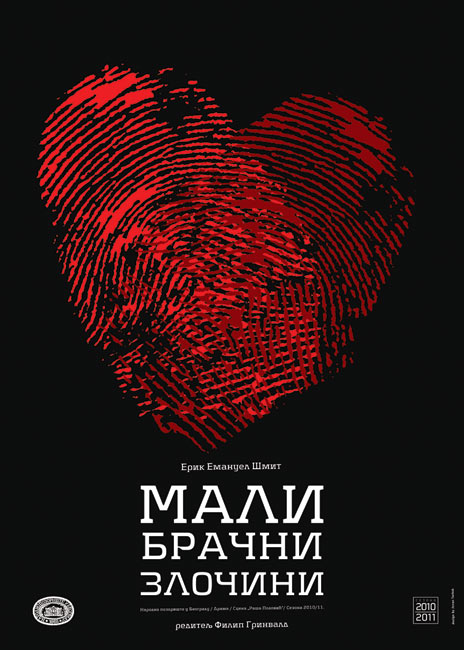 ERIC-EMMANUEL SCHMITT
Born in 1960, he attended the prestigious Ecole Normale Supérieure where he was awarded a doctorate in Philosophy and the top French teaching qualification. Schmitt first made a name for himself in the theatre with The Visitor, a play that posits a meeting between Freud and – possibly – God; the work soon became a classic and is now part of international repertoire. Further successes quickly followed, including Enigma Variations, The Libertine, Between Worlds, Partners in Crime, My Gospels and Sentimental Tectonics. Acclaimed by audiences and critics alike, his plays have won several Molières and the French Academy’s ‘Grand Prix du Théâtre’. His books have been translated into 43 languages, and more than 50 countries regularly perform his plays. Much of his literary career has been devoted to writing novels. In 2010 his third book of short stories, Concerto in Memory of an Angel, was awarded the prestigious Prix Goncourt de la Nouvelle (short story). His latest novel is Ulysses from Bagdad. Odette Toulemonde, the first motion picture he wrote and directed has been running on European screens in 2007. Encouraged by this international success, he has adapted Oscar and the Lady in Pink for the screen, to reach cinemas in late 2009. A keen music-lover, Eric-Emmanuel Schmitt has also translated into French The Marriage of Figaro and Don Giovanni from the original Italian. His fertile imagination continues to open new doors and cast unusual reflections. Within a decade, Eric-Emmanuel Schmitt has become one of the most read and acted French-language authors in the world.
According to: www.eric-emmanuel-schmitt.com 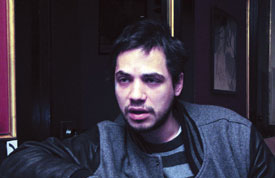 Critics on Little Marital Crimes
A play that doesn’t pull its punches and will have audiences on the edge of their seats, laughing and terrified by turns. (…) Eric-Emmanuel Schmitt controls the brief exchanges with awesome precision and provides theatre directors with all the necessary stage directions.
EWI, La Liberté (Suisse)
A man has received a blow on the head and finds himself back in his flat with a woman he does not know but who is nevertheless his wife. His confusion is the result of amnesia - or so we are led to believe, for Schmitt has more than one coup de théâtre up his sleeve. Repeatedly, the characters turn out to be other than we imagined. In contrast to the usual gender stereotyping, neither is a stranger to harshness and criminal impulses. Marital relationships are the central theme in this chiaroscuro play where calm alternates with violence, courtesy with brutality, dawdling with haste. On the face of it, the iron hand is in the velvet glove, as Gilles and Lisa strive to shield one other from the truth. At a deeper level, this is a treatise on the human bonds that get worn away and whose only salvation, or second wind, is possible through a crisis and the resolution of that crisis. Schmitt engagingly disentangles the old-fashioned and modern elements in the emotional and amatory behaviour of contemporary man... and woman.
Gilles Costaz, Magazine Littéraire
Just when you thought you’d caught the leaf fluttering in the breeze, the wind picks up and whips it away; the instant you think you’ve hit on a truth, new information refutes it and leaves you at a loss. The gradual undermining of our certainties is the subject of Eric-Emmanuel Schmitt’s new play, Conjugal pecadillos (Petit Crimes conjugaux). From the author or Enigma Variations comes another psychological ‘thriller’ that shows him at his mischievous best, revelling in his authorial omniscience, manipulating and puzzling both characters and audience. You can almost see him sneaking about in the background, rubbing his hands in glee at the farce he’s concocted. (...) Conjugal Pecadillos is a sparkling comedy but there’s scarcely a glimmer of optimism.
Armelle Héliot, Le Figaro
A work so intelligent it makes the audience feel intelligent.
André Lafargue, Le Parisien
A man and a woman: a couple involved in a war of attrition. What could be more frayed or fundamental than a married couple? (...)  Schmitt’s sense of dialogue, suspense and drama has gone from strength to strength since The Visitor and Enigma Variations. His talent for keeping the audience on the edge of their seats has here reached new heights. In this double act on the theme of two characters in search of the truth about each other, the twists and turns are far too many and too ingenious to penetrate.
Annie Coppermann, Les Echos
Love and conjugal life are the subject of this play. What happens between a lady and gentleman, however intelligent, however well disposed towards each other and however well-balanced, after 15 years’ cohabitation? The answer is bleak: it’s hell...
Bernard Thomas, Le Canard Enchaîné
... it’s written theatre, and well written, where every expression is exactly right and the lines bounce off each other as naturally as a tennis ball, in the best manner of psychological drama. (...) This is theatre which it is a genuine pleasure to read.
B.P, Le Bulletin des Lettres
It makes first-class theatre on the subject of marriage, white lies and deceptive appearances...
Sud-Ouest Dimanche