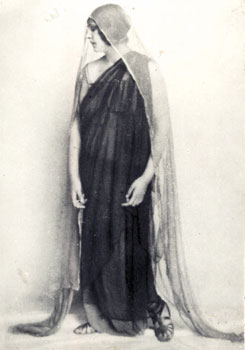 Only after the First World War and the already mentioned influx of artist from the Soviet Union – from Empire Marijinski Theatre, Bolshoi Theatre from Moscow, Russian Ballet of Sergei Daighilev, etc. it was possible to establish the Ballet Company in the National Theatre, although there were some, however rare, dancing and ballet guest performances before. The Ballet Company gave its first full-length performance on 22nd January 1923, it was Shchelkunchik by Peter Ilich Tchaikovsky. It was impossible to establish national dancing company without Russian artists – prima ballerinas and ballet pedagogues: Jelena Polyakova, choreographer and pedagogue in state Acting-Dancing School and Jelena Polyakova School, she taught until the Second World War; Margarita Froman was an expert who spent several seasons in Daighilev’s company, as a choreographer she introduced significant classical heritage and modern choreographies of then popular international repertoire to the Belgrade ballet stage; Nina Kirsanova holds a special place as a choreographer and as a link to repertoire of Ana Pavlova Company (in which she was a prima ballerina in period between 1927 until the death of the great ballerina). The Ballet Company of the National Theatre and Belgrade audience were exposed to the purest classical ballet heritage. Productions like Coppelia (first production in 1924), Swan Lake (1925), Giselle (1926), and Sleeping Beauty (1927) have remained, with only short breaks, on the repertoire of the National Theatre until today. Before the Second World War, famous choreographies of Mihail Fokin have been successfully produced, namely: Scheherazade, Les Sulphides, Polovecki Dances, The Firebird, Petrushka, Don Juan, The Golden Rooster; choreographies by Leonid Miasin The Three-Cornered Hat, Sorceresses’ Love, A Man and Destiny; choreographies by Boris Romanov Tamara, Ballerina and Bandits, Bolero; and choreography of David Lishin Francesca Da Rimini, etc.

Other choreographers of the period were Mstislav Pianovski, Anton Romanovski, Boris Knjazev, Margarita Froman, Nina Kirsanova, Pia and Pino Mlakar, Anatolije Žukovski, etc. Simultaneously with choreographers’ activities, there was an important process of creating ballets to the music of modern Yugoslav composers: Gingerbread Heart (1927) and Imbrek with a Nose (1937) by Krešimir Baranović; The Legend of Ohrid by Stevan Hristić (1933); The Devil in the Village by Fran Lotka (1938); Fire in the Mountain by Alfred Pordes (1941); Symphony Kolo by Svetomir Nastasijević (1942). Such demanding repertoire was realized by superb artists: Nataša Bošković, Nina Kirsanova, Marina Olenjina, Janja Vasiljeva, Anica Prelić and Maks Froman, Anatolije Žukovski, Aleksandar Dobrohotov, Mihail Panajev, Miloš Ristić... Dimitrije Parlić, future soloist and distinguished choreographer of the Ballet Company of the National Theatre and Ruth Parnel, future prima ballerina, have been a part of the ensemble. Dimitrije Parlić’s work in reorganized ballet company after the World War II, is considered to represent the creation of choreographic base and realization of visionary artistic policy. Dimitrije Parlić (1916–1986) produced a rich choreographic opus; some of his works, like Romeo and Juliet (1949) are still being performed. Significant contribution to the national choreography was given by Margarita Froman with her production of The Legend of Ohrid (1947), the most popular and performed national ballet; Pia and Pino Mlakar with The Ballade of a Medieval Love and The Devil in the Village; Vera Kostić with many choreographies like The Firebird, Coppelia, Darinka’s Gift, Carmen; Mira Sanjina with Salome and The Ballade on Wandering Moon… These choreographers were made to the music of Yugoslav composers like Fran Lotka, Mihovil Logar, Enriko Josif, Zoran Hristić, etc. Productions of modern authors are different in choreographic expression, they write their own librettos, tend to use the music and cooperate with Serbian composers: Svetomir Nastasijević, Rajko Maksimović, Zoran Erić, Stanko Šepić, Vojislav Voki Kostić. Internationally renowned choreographers have been guests at the ballet stage of the National Theatre, such as Leonid Lavrovski, Rostislav Zakharov, Nina Anisimova, Maurice Bejart, Janine Shara, Patricia Neary who introduced choreographies of George Balanchine, Peter Darrell...