First adjustments and extensions have been done as early as in 1870. Relatively small stage required enlargement. The added part in the rear of the stage was lower and built of bad material. Besides enlargement of stage, there were plans to build changing rooms for extras, storage for décor and furniture, and a painting atelier. First plans for extension of the building were elaborated probably by the contractor Vinter, but they were then again entrusted to Aleksandar Bugarski. Construction was delegated to a contractor Erlmeier. Extension was done on the ground that did not belong to the Theatre, but the Theatre’s Board gave green light to start building without a permit. Interior was given much attention and no expenses were spared. All surfaces in the auditorium, loges, pillars, ceilings were decorated in gypsum and covered in thin layer of gold. Medallions with coat of arms of all Serbian countries and portraits of significant Serbian rulers and writers were placed on loges’ fence. Medallion with the image of Prince Mihailo, the founder of theatre building, was placed above the stage. Seats and stage equipment were purchased in Vienna, as per the Theatre Board’s decision. There was a large chandelier, with more than one hundred gas flames, placed in the middle of the ceiling, just under the airing rosette. Kaucki, the Viennese court painter did all the painting work, as well as the curtain painting. Lighting of the scene, changing rooms, storage rooms, auditorium, in other words of the whole building, was fuelled by natural gas. 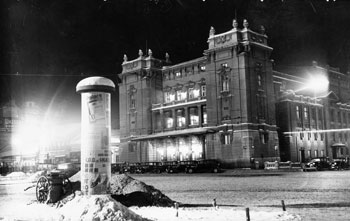 The gas factory was placed just twenty meters away from the theatre building, at the Dositejeva Street and Braće Jugovića Street, in the deserted mosque - Karadžamija. Problems with the stage and rooms, lack of changing rooms, weak construction because of lack of funds have brought about another decision regarding more substantial reconstruction in 1911. The Ministry of Construction has made its employee, the architect, Josif Bukavac in charge of this reconstruction. The plans covered reconstruction that would change both exterior and interior of the National Theatre, as well as dimensions and arrangement of rooms. In the summer of 1912, the enlargement of the stage started. However, in autumn of the same year, the reconstruction was stopped due to start of the Balkan War, but it restarted in summer of 1913 when the reconstruction was mostly finalized. The following year, 1914, reconstruction of auditorium started, but the works were interrupted again due to the beginning of the First World War. In period between 1915 and 1918, many elements of reconstruction were destroyed due to bombing of Belgrade, as well as due to Austrian-German occupation. Construction works on the Theatre continued in 1919, the plans of 1911 were somewhat changed, and the reconstruction finalized in 1922. In this reconstruction, the exterior architecture lost its unity of style and harmony of original design by Bugarski; it became a mixture of secession and baroque. Auditorium now had 700 seats, 33 loges (plus a royal one, somewhat bigger than others) and 66 standing places – totalling to 944 places. The stage was enlarged in depth and a rotation round stage was installed. Dressing rooms, workshops, offices, storage rooms and other premises were situated in the back on the second and third floor. All the installations have been changed and central heating was introduced. The immigrant Russian architects have assisted the architect Josif Bukavac in interior design; their taste and influence can be seen in decorations in auditorium, vestibule and foyer in the first gallery that got even more plaster ornaments, artificial marble and baroque motives. Russian painter Stepan Kolesnikov painted the ceilings in his outstanding style. The only thing that remained from the previous building was a medallion that represents a profile of Prince Mihailo, situated above the stage portal, renewed by sculptor Đoka Jovanović. The Theatre was damaged again in bombing of Belgrade on 6th April 1941. At the end of same year, The Ministry of Construction started reconstructing the Theatre, although the country was occupied. The building was enlarged again; at its base another part was constructed that was asymmetrically placed at the side where offices, rehearsal rooms, workshops, storage rooms, dressing rooms, three apartments and other premises were situated. Once symmetrical and monumental building from 1922 completely lost its harmony, its length was double than originally designed. Lack of funds during reconstruction influenced the exterior architecture of the old part of the building; the exterior was forcefully simplified and gave the impression of being unfinished. The middle entrance from vestibule into auditorium was closed and only the side entrances, rather modestly decorated with unpainted ceiling, were left. Architects Gojko Todić initially and later Dragan Gudović were in charge of the reconstruction. Construction company owned by the architect Milan Sekulić did most of the reconstruction works. Upon the end of season 1964/65, there was a modest adaptation of the Main Stage based on design of an architect Nikola Šercer. The auditorium was enlarged by removal of loges and by installation of smaller seats with narrow space between them. The large crystal chandelier was taken down and the auditorium was adorned with new bas-relief and walls were covered with oak matchboards, as well as with blue seats and curtains. The new linoleum floors were installed, the number of spotlights was increased to twelve, and new central heating was introduced, as well as silent airing fans. 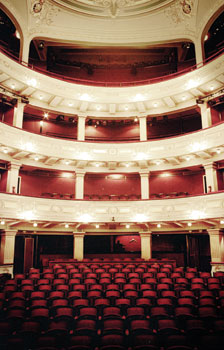 In 1986, the National Theatre and the City of Belgrade decided to start another, necessary extensive reconstruction of by then completely inapt building. Ljubomir Zdravković and Slobodan Drinjaković were the main architects and designers for reconstruction of the old building and construction of a new addendum. Interior was done according to designs of architect Milan Pališaški; Branka Bremec, Dimitrije Ivančević and Zoran Badnjević designed the façade and decorations; engineer Milenko Popović did the structural statics. Trudbenik, the contracting firm, was in charge of the project and works. The reconstruction lasted for almost three years and the cost was approximately 4.5 million dollars. Formal opening of the “new” theatre took place on 15 October 1989 and the first performance Aeschylus’ Oresteia was given on 10th November the same year. In this reconstruction, the old building restored its design from before the II World War and the total area got almost doubled by adding on the new modern construction where offices were situated on five floors above and two under ground. The building now has eighteen thousand five hundred square meters out of which seventeen thousand square meters are floor area. Loges that were removed in 1966 have been restored and now they look the same as in XIX century, situated in semi-circle arrangement. The auditorium was reconstructed and has a new look, it has been refurnished into red velour and plush and there are white and gold colours also dominating. 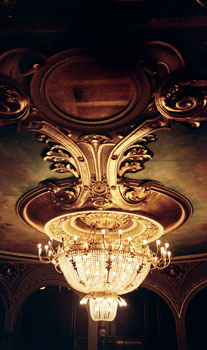 There is a plaque with names of all donors and patrons of the Theatre from the nineteenth century situated in the foyer of the second gallery. The ceiling paintings by Kolesnikov in the auditorium were restored, a composition made of two paintings, Bacchanal and Thalia in a chaise of four horses. The foyers are different and more decorative. Marble floors, gypsum ornaments on ceilings, mirrors, and crystal chandeliers were installed; and the bust of Prince Mihailo, the theatre founder, was placed in the main foyer. In the new, the so-called working building, the architects and builders left connections for underground corridors, that could one day be extended under the Francuska street in order to make an underground connection to the new building for Opera and Ballet, that should be built at the Square of Republic, across the street from the National Theatre. According to the plans, it should be just a large stage and auditorium hall with more than 1500 or 2000 seats, while both buildings should be utilized by the same staff. It can be said that the National Theatre in Belgrade today represents a modern unity of old and new in architecture, and from the technical point of view, the theatre belongs to the best-equipped theatres, globally looking, with the top-notch equipment.