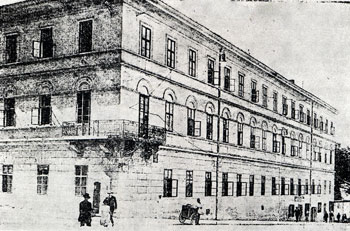 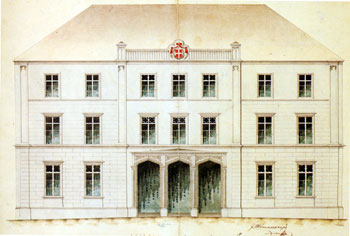 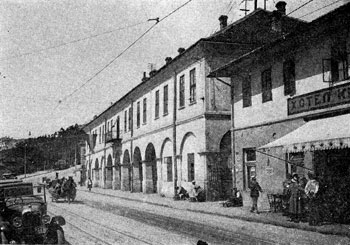 Attempts to establish a theatre were accompanied by attempts to find adequate building for it. In the meantime, performances were given either in the Customs office’s warehouse (Theatre on Djumruk), in hotels (Theatre Kod jelena), in the Prince’s Brewery, in inns (Kod krune and Kod engleske kraljice). A first substantial attempt to build the theatre was initiated by the Board of Supporters of National Education Association and the Theatre Board that organized fund raising. Government of the Principality of Serbia donated 2000 ducats and a lot of 228 m2 on Zeleni venac, Prince Aleksandar Karadjordjević donated 1000 ducats and 80 m3 of stone, Miša Anastasijević donated 500 ducats… There were three plans: by a Czech architect Jan Nevola, by an Italian architect Joseph Cassano and the third one by the well-known contractor Steinlechner. The construction was obstructed by sodden ground and the lack of funds. Three years later, there was another unsuccessful attempt to build at the same lot; this time the Government approved a credit of 10,000 ducats (under condition to place the museum and library in the same building); the credit was used to fortify the ground with wooden piles, but to no avail. During winter 1867-68, Serbian National Theatre from Novi Sad gave sixty-four performances in inadequate premises in Kod Krune and Kod engleske kraljice inns in Belgrade. After one of these performances Prince Mihailo said, “I am going to build you a theatre and you will be contented.” 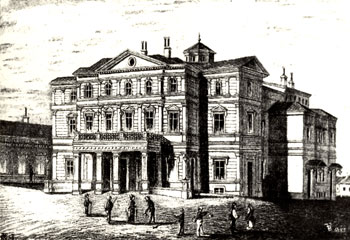 Therefore, upon founding of the National Theatre, the Prince and the State Council gave a new lot, an ex Turkish ground near Stambol Gate. The Prince also renewed donating practice by allocating five thousand ducats himself. Unfortunately, he did not live to see the beginning of construction works; he was assassinated on 3rd June 1868. Prince Milan placed the corner stone. It is believed that Architect Aleksandar Bugarski designed the project of theatre building near Stambol Gate, although it is not quite certain according to documents. In spring 1868, Steinlechner was again engaged as a contractor. The contract was signed on 23rd May 1868 for 12,550 ducats and additional building materials that remained after building attempt on Zeleni venac and around 150 m3 of stone from old Turk-owned houses from Stambol Gate. Construction went very quickly. Ground works started on 29th May and the corner stone was laid on 18th August 1868. The construction was finalized as early as January 1869. Theatre auditorium had approximately 800 places in a town that had a population of 25000! The first performance in the new building was given on 30th October 1869. There are the following accounts of the event:

… The performance left a strong impression on audience, especially when an actor, dressed as Prince Mihailo, appeared on the stage on a horse. When the audience saw him on a horseback, they thought they were looking at Prince Mihailo alive, wrote a critic of the Vidovdan newspapers…”

Besides the Captain Miša’s Building, the building of National Theatre in Belgrade was, at the time, the largest and the most luxurious palace in Serbia. Its façade resembled the Scala in Milan by Piermarini that was built ninety years earlier (1776 – 1778).