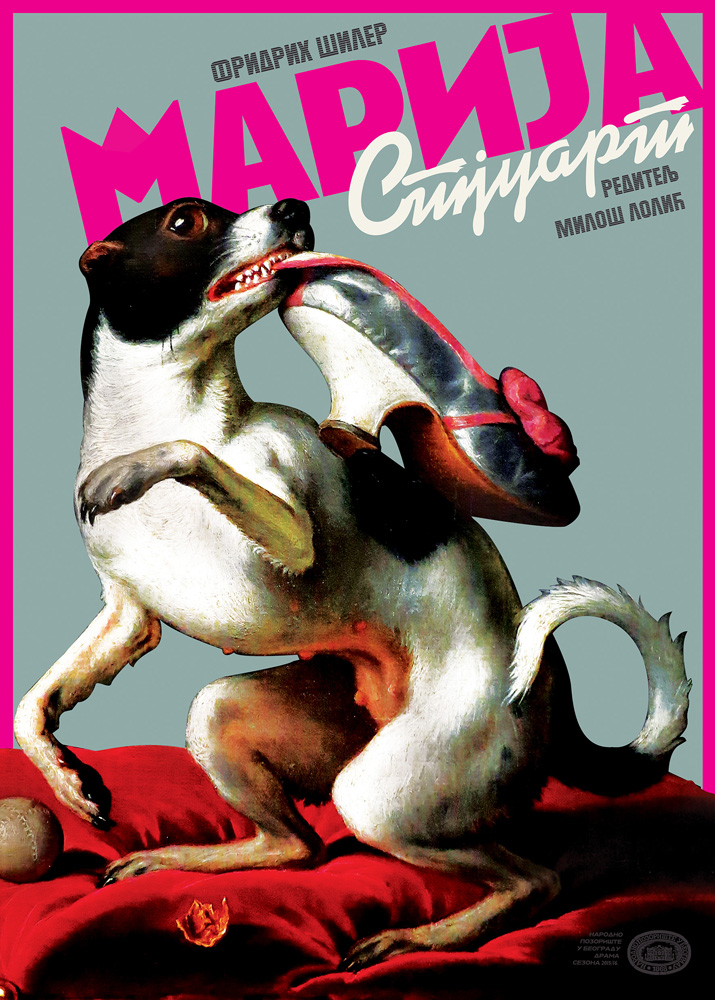 NATURE WITHOUT UTOPIA
Since the moment they stepped on the brutal political stage of the XVI century Europe, Elisabeth I (1533–1603), Queen of England and a Protestant, and her relative Mary Stuart (1542–1587), Queen of Scots and a Catholic, came into conflict with each other. Modern people in their comfortable situation could simply place them in a textbook if they did not think thoroughly about the fear they lived in: either of them, depending on ever changing circumstances, could easily be executed. In the Tudor era, executions of this sort were not considered cruel. On the contrary, the execution of that kind was considered a privilege. The VIP treatment was also given to Anne Boleyn, mother to future Queen of England. Today, when the two historical enemies lie next to each other in Westminster Abby, we can say that (at least) they are equal in death. But at the time when they were political factors, that was far from the truth. Mary Stuart claimed the right to as many as three European crowns. She was entitled to the crown of Scotland by her birth, with her first marriage she became the Queen of France and, as a granddaughter to a sister of the treacherous and dangerous Henry VIII, Elizabeth’s father, she also claimed the right to the throne of England. Elizabeth’s dynastic line was far more modest. She was declared illegitimate when she was a child and, as such, she had to fight for the right to be merely present at the court. Their starting position in life, Mary was “queen without reservation” and Elizabeth was “queen under reservation”, would reverse in time: Elizabeth’s power as a ruler would (without a doubt) grow, vigorously and constantly; while Mary Stuart, as the state enemy number one, would spend two final decades of her life under incessant doubt of being “a harlot, or a martyr, or simply a mad schemer?” In both their biographies, according to Stefan Zweig, “we speak of destinies full of violent changes; they belong to the group of people whose clocks of life tick much faster than those of their contemporaries.” Schiller’s tragedy about conflicts between passion and reason, impulsiveness and responsibility, and divergence of two natures that are irreversibly different, is about two colossal women and their two different principles as state leaders, based on historical facts. In this sense, the image of the world remains unchanged. Mary Stuart’s fate is just like the history tells. Elizabeth’s as well. But the account of this royal chronicle receives its full meaning only when, behind foggy historical curtain, two dramatic characters are revealed; they truly suffer and, at the same time and with the same intensity, they burn with desire to deal with the suffering. It is clear that they both were quite remarkable women. Both of them have two bodies. The first one is the natural one, passionate and prone to death, it matures and grows old. The other one is political – invisible to the naked eye, it cannot be touched and it is focused on making important decisions. Schiller gives poetic dignity to his heroines, to which they both claim right not only by their birthright, but more with their intelligence and spirit. It is a fact that they could never establish connection and become reconciled, because their life paths were alike only because they had a tendency to diverge from each other, which corresponds to the fact that there could never be two suns on the Earth. Characters in the tragedy have their historical biographies (with the exception of young Mortimer, whose character represents a mixture of several Mary’s fanatical followers with the idea about romantic Sturm und Drang hero); however, Schiller’s treatment of historical facts deviates from actuality in the first two acts. Mary Stuart was seriously ill at the very end of her life, though Schiller represents her as a flirtatious and healthy woman. She had never had any sort of a relationship, least of all an emotional one, with Elizabeth’s favourite, Earl of Leicester. In Schiller’s tragedy, however, there is a clear indication of such love triangle. And when we reach the third act, when the two queens meet for the first time although they had kept correspondence with each other but have never seen each other in person, it is clear that Schiller sacrifices the historical truth to the laws of poetic truth. He himself states this when he wrote about the art of tragedy, “With non-observance of historic truth the poetic truth stands to gain even more.” And in truth, dramatic force of the tragic encounter, in a wood next to the Castle of Fotheringay in which the Queen of Scots had been confined, is so forceful that we could state that this scene is the basis for the whole dramaturgical construction in which two timelines keep interlinking, the historical one and the metahistorical one, in order to accomplish what Schiller calls “over-sensuality” (ubersinnliche). Existence of historical basis is a sort of a given that presents a part of his dramaturgical content. But, opposite to history, there is nature. Nature, as the wood where the predestined meeting takes place, but also as an unstoppable force that complicates lives of all the characters, awakens their sensuality and their suppressed urges, breaks the limits and rescinds reservation. The nature, which reveals secrets and destroys uncertainty. In Mary Stuart, the nature awakens a sense of ultimate entanglement in the net of politics. Her Scottish ancestors, Macbeths and Macduffs, should have served as good examples to her. If she had remembered them in time… In Elizabeth, the nature awakens awareness that there should not be additional diplomatic games and no family affection any more. The nature makes her shifting character finally stop resisting the inevitable. The chess game has to end. In that game of strategy only one head may remain on shoulders. And that is not the one renowned for its thoughtless courage. 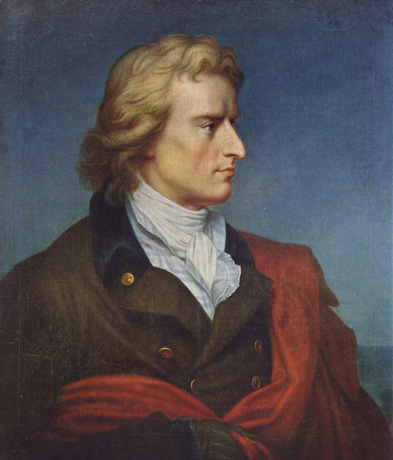 FRIEDRICH VON SCHILLER (1759–1805)
Schiller was a German dramatist, poet and literary critic, one of the greatest figures of German literature. German literature considers him the founder of a unique type of tragedy, as much historical-political as humane-metaphysical sort of tragedy. His first success was achieved with The Robbers, in which he examines the issue of freedom, a central theme in his whole opus. After being appointed Professor of History at the University of Jena in 1789, Schiller focused on his epic masterpiece, historical play Wallenstein, and on studious summing up of his aesthetic views. He wrote numerous essays in philosophy, extraordinary contemplative poems and several very popular ballads; his Ode to Joy became the basis for Ludwig van Beethoven’s Ninth Symphony. Schiller spent the final years of his life in Weimar, with his friend Johann Wolfgang von Goethe. Mary Stuart, a play which focuses on the freedom of soul that gives a person the strength to rise above the frailty of a body, was performed in 1800, five years before Schiller’s death. Tragedies written in the times to come were, actually, debates with the model of tragedy proposed by Schiller, his poetry had a long-term changing influence. He placed the issue of freedom in the centre of European theoretic thought on art and developed the idea of aesthetic culture, which has a task to re-establish the human integrity and totality, and he treated art as a tool of knowledge. 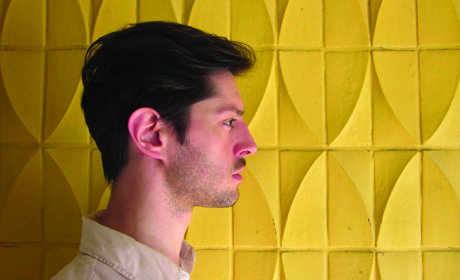 MILOŠ LOLIĆ
Miloš Lolić graduated from the Department of Theatre and Radio Directing at the Faculty of Dramatic Arts in Belgrade, mentored by Professors Slavenko Saletović and Ljubomir Draškić. Selection of his works (stage directing): Adam and Eve by Miroslav Krleža (Bitef Theatre, 2002), The Great White Conspiracy by Dimitrije Vojnov (Atelje 212, 2004), The Other Side by Dejan Dukovski (YDP, 2006), Tesla, a Total Reflection by Marija Stojanović (Jugokoncert and YDP, 2006), Men’s Business by Franz Xaver Kroetz (Atelje 212, 2007), The Dreamers by Robert Musil (YDP, 2008) God Is a DJ by Falco Richter (Little Theatre “Duško Radović”, 2010), Bartleby the Scrivener after a story by Herman Melville (MiniTheatre, Ljubljana, 2011), Blood Wedding by Federico Garcia Lorca (Volksteatar, Munich, 2011), Magic Afternoon by Wolfgang Bauer (Volksteatar, Vienna, 2012), Jacques or the Submission by Eugene Ionesco (City Theatre, Ljubljana, 2012), Othello by William Shakespeare (YDP, 2012), Roberto Zucco by Bernard Marie Koltes (Volksteatar, Munich, 2013), The Presidents by Werner Schwab (Volksteatar, Vienna, 2014), The Journal of Čarnojević after the novel by M. Crnjanski (YDP, 2014), The Bacchae by Euripides (Theatre “Maxim Gorky“, Berlin, 2015). Awards: Grand Prix “Mira Trailović“ at 43rd BITEF Festival (for The Dreamers ), Grand Prix at the Borštnikov srečanje Festival in 2011 (Bartleby the Scrivener), Award for Best Stage Director at the Bayerische Theatertage Festival in Augsburg in 2012, The Politika’s Award for Stage Directing at 46th BITEF Festival (Blood Wedding) and two Austrian awards – the Nestroy Award for Magic Afternoon and the Dorothea Neff Award for The Presidents in 2014.