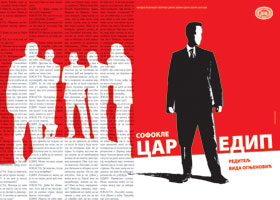 OEDIPUS, POLITICS, POWER, CORRUPTION
… Creon’ s arrival from the out-of-city parodos is a matter of some dramatic importance. It is a first of three entrances that he will make in the play, at the end of which, as the new king, he will hold the position that Oedipus currently occupies. The priest informs Oedipus that it would seem that Creon brings good news or else he would not be wearing a crown fully ladden with laurel leaves. A laurel crown was worn by victors at the Pythian games, which were held at Delphi and were second in prestige only to the Olympic games. Creon’ s mask therefore endows him with an aura of the victor.
… The political motif is intensified with second entrance of Creon. He has heard the terrible accusations that the monarch (tyrannos), Oedipus, has levelled against him.Earlier, we note the distinctive quality of Creons mask with its laurel crown. It is a matter of some importance whether Creon’s mask is different in any way on his second appearance. It would be unusual if his costume where changed at all without some clue in the text. In fact, the text does draw special attention to Creons mask. As soon as Oedipus sets eyes on Creon, he immediately makes a pointed reference to Creons mask: „Have you such a face (prosopon) of effrontery that you have come to my house, when you are palpably my murderer and openly the robber of my kingship (tyrannis)?“ It is a reminder for the audience of the tacit threat that Creon poses to Oedipus.
… Seen from Oedipus’ point of view, he has only Creons word about the message from Delphi. A common charge against prophets in tragedy is that they are venal, and Oedipus has made it clear that he believes that Teiresias has been bribed by Creon. In the following angry scene between Oedipus and Creon, Creons arguments in his own defense have the specious air of political sophist:

CREON: ... I deem it fair to learn from you just as you deem is fair to learn from me.
OEDIPUS: Learn all you like: I shall not be exposed as a murderer.
CREON: Well then, are you married to my sister?
OEDIPUS: There can be no denial for the fact.
CREON: Do you rule this land, giving her an equal part?
OEDIPUS: All that she desires she gains from me.
CREON: And am I equal to you both as third partner?
OEDIPUS: It is in this very thing you prove a villainous friend.
CREON: Not if you reason the matter as I do. Think first of this, whether you believe that someone would prefer to rule in dread rather than to rule sleeping fearlessly, if the privileges be the same. Look, it is no in my own nature to desire to be a ruler (tyrannus) rather than enjoy royal perquisites (tyranna).“
Creon does not deny that he likes benefit of power; he simply does not want the aggravations of monarchy..It is not surprising that to Oedipus, Creon’ s speech seems duplicitous and does not allay his suspicions.
... Sophocles uses blind mask in three of the seven extant tragedies, as well as in at least two other lost plays. Did Sophocles train a special actor to use blind mask? If he did, it is conceivable that in the last part of the play, the actor who had played Teiresias earlier plays Oedipus in the last scene, and that Creon, the new king, is played by the actor who before had played Oedipus...Gould makes particularly telling point about Creon’ s final entrance: „Kreon’s entry ironically echoes his first entry in the play: once more there is a political decision tobe made, and once more the god’s judgement (i.e. Apollo at Delphi) to be sought, but now the decision is Kreon’s and like Oedipus’ then, he will await the god’s word and then act on it. This Kreon indeed possesses the same calm and reasonable assurance that was the mark of Oedipus in the opening scene, and like that Oedipus he has foreseen what must be done and has already sent for Oedipus’ daughters for a last greeting and farewell. It is as if Oedipus, himself transformed into another Teiresias, is reborn in this new cool but humane Oedipus.“

… It is the overthrow of the tyrannos, of man who seized power and thought himself „equated to the gods“. The bold metaphor of the priest introduces another of the images which parallel in their development the reversal of the hero, and which suggest that Oedipus is a figure symbolic of human intelligence and achievement in general. He is not only helmsman, ploughman, inventor, legislator, liberator, revealer, doctor – he is also equator, mathematician, calculator..One of Oedipus’ favorite words is „measure“ and this is of course a significant metaphor: measure, mensuration, number, calculation – these are among the most important inventions which have brought man to power. Aeschylus’ Prometeus, the mythical civilizer of human life, counts number among the foremost of his gifts to man.
Bernard Knox: Sophocles’ Oedipus (u: Tragic Themes in Western Literature, ed. by Clint Brooks, Yale UP, 1955)
Prepared by Svetislav Jovanov 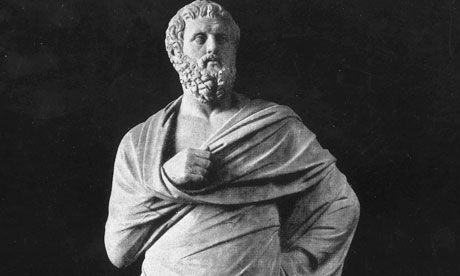 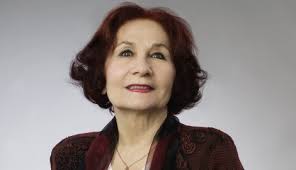 VIDA OGNJENOVIĆ
Vida Ognjenović was born in Dubočke near Nikšić, grew up and went to school in Vojvodina and Serbia. She finished elementary school in Vršac and grammar school in Sremski Karlovci. She graduated literature from the Faculty of Philology in Belgrade (1963), and directing from the Faculty of Dramatic Arts in Belgrade (1965). She began her post graduate studies at Sorbonne in Paris, and received her Master’s degree at the University of Minnesota, USA (1972). She worked as an assistant at the Faculty of Dramatic Arts in Belgrade from 1974 till 1979. In 1977 she was nominated Head of the Drama of the National Theatre in Belgrade and after that stayed as a director in that same theatre. As a visiting professor she taught at Universities in Los Angeles (UCLA, 1981-1982), Chicago (UIC, 1997-1998). On her lecturing tours, she visited all the major Universities in the USA (1985, 1991, 1997, 1999). She is a full professor at the Academy of Art in Novi Sad. She directed a great number of theatre performances, TV and radio dramas, many of which were her original plays. She wrote many dramas, which were staged and performed many times, and were also published by different publishing houses. As a director she was a guest in many theatres throughout former Yugoslavia (Montenegro, Slovenia, Croatia), and also did performances outside our country. She directed varied repertoire of  plays, including Yugoslav and foreign classics as well as modern contemporary dramas.For her work she received all the significant theatre awards: Sterija Award for directing (“Jegor’s Road”, 2001), Sterija Award for the best text (“Was there Prince’s dinner?”, 1991), Sterija Award for dramatization (“Root, trunk and epilogue”, 1984), Sterija Award for the best text (“Jegor’s Road”, 2001), October Award of Belgrade for directing (“Mephisto”, 1984, Golden Wreath of the Festival in Sarajevo for directing “Mephisto”, 1985), “Joakim Vujić” Award for the text (“How to make Master laugh”, 1998), Golden Turkey for directing (“How to make Master laugh”, 1986), Golden Turkey for the best text (“How to make Master laugh”, 1986), Award of the Cultural Association of Belgrade for directing (“Migrations”, 1986),”Joakim Vujić” Award for theatrical play (1999), Vuk’s Foundation Award for art (“Was there Prince’s dinner?”, 1990, Award from the Budva City Theatre for dramatic work (2007)). She published six books: “Poisoned Dandelion Milk”, (Prosveta, Beograd, 1994) and “An old clock” (Prosveta, Beograd, 1996), “Best stories of Vida Ognjenović” (Prosveta, Beograd, 2001), novel “A House of Dead Scents” (Prosveta, Beograd, 1996), “Journey into travel book” (2005), novel “Adulterers” (2006) and seven books of dramas: “Melancholic dramas” (SKZ, Belgrade, 1991), “A girl with dark blue hair” (Ars Dramatica, Belgrade, 1994), “Mournful comedies” (SKZ, Belgrade, 1994), “Mileva Einstein”, collected dramas in three books Drama I, II, III (Stubovi kulture, 2000, 2001, 2002), “Kanjoš Macedonović” (Oktoih, Podgorica, 1989) and “Jegor’s Road” (Oktoih, Podgorica, 2000). She also received many significant literary awards: Prosveta Award for the book of the year (1994), Andrić Award for a story (1995), Branko Ćopić Award for prose text (1996), Laza Kostić Award for a novel (1996), Karolj Sirmai Award for stories (1996), Paja Marković Adamov Award for prose (1997), Ramonda Serbica Award for prose (1998), Stefan Mitrov Ljubiša Award for Literature (1999), Award from the National Library of Serbia for the book of the year (“Adulterers”, 2007). Her prose and dramas were translated into English, French, Hungarian, German, Norwegian, Macedonian and other European languages. She also worked as  the Yugoslav (later Serbia and Montenegro) ambassador to Norway.

OEDIPUS REX AT THE NATIONAL THEATRE STAGE
This famous Sophocles’s tragedy was produced for the first time at The National Theatre on January 22, 1900, under the title Oedipus the King. Various sources mention two actors as a possible director of this faraway stage production – one is Miloš Cvetić, the other is Milorad Gavrilović. The piece was staged for the second time on February 22, 1957, under the title Oedipus Rex, in the translation of Dr Miloš Đurić. Director of this production was Dr Hugo Klajn, set designer – Miomir Denić, costume designer – Vera Borošić. Ljubiša Jovanović played the title role, Sava Severova, as a guest played Queen Jocasta, Vasilije Pantelić was Creon, Raša Plaović was prophet Teiresias. The following production was presented on December 7, 1979 in the translation of Ljiljana  Crepajac. Horea Popescu, a guest from Romania, was director and set designer. Ljiljana Orlić was costume designer. The roles were assigned to: Miloš Žutić (Oedipus), Ksenija Jovanović (Jocasta), Petar Banićević (Creon), Vasa Pantelić (Teiresias).