THE MINISTER'S WIFEcomedy by Branislav Nušić 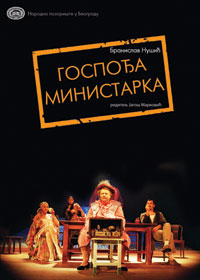 A PLAY TO TALK ABOUT
There is a traditionally furnished Serbian room. There is a stove, smoke is coming out from the stove’s pipe; there are pots, washbowls, pails; there are various chairs which do not match and a big table. It is a kind of a room in which “our people” spend most of their lives. There is a road paved with cobblestones; the road is a typical uphill Balkan street where the strong winds carry dust. It is difficult to go up and down the road. At the corner of the stage, designed by Boris Maksimović in a concise and intuitive way, deprived of any excessive details, there is a turkey-cock strutting around. Živka and others go up the road. Živka’s house is poor. The character of Živka, interpreted by Radmila Živković, is a martyr, and yet still feisty, although already at the end of her energy and nerves. Živka awaits the luck from heaven, but it doesn’t come! Her son, Raka, is injured and covered with band-aids; he is a source of great worry for his mother, as much as her husband, who is an irresolute man, a public servant who has no skill, oh wonder, to use his position for personal gain! Nušić says that the times are hard, and Živka agrees. Audience, even those who are not familiar with Nušić’s text, know the line, as if it is applicable for all periods and generations. Radmila Živković’s Živka mends her son’s trousers in deep contemplation as if she is making decisions of utmost importance. A character in Nušić’s play does not have to talk; he/she can be silent and still be hilarious! All the worries in the world are on Živka’s face. She cannot decide where to turn her attention first, and troubles come in groups. Lack of money and the impressive, dressed in black, aunt Savka, interpreted by Milka Lukić, is a difficult and suspicious person. Director Jagoš Marković and Radmila Živković as Živka have given their best in this production, which will remain and be talked about as of The Bereaved Family by Mata Milošević, Mr Dollar by Miroslav Belović, The Suspicious Person by Dejan Mijač, as well as of interpretation of the Mrs. Cabinet Minister’s Wife by Žanka Stokić, or Ljubinka Bobić. And they were successful. However, not everything in Jagoš Marković’s production was new. Jagoš Marković has skilfully played with a dream, obsession, madness of power, need and striving to go beyond one’s capability, to become a person of reputation. The contrast between reality and dream, poor life and heavenly life of a minister’s wife has been powerfully emphasized with music (editing of music, music effects and sound design was done by Vladimir Petričević). The contrast of utmost misery and glorifying music, signifies and foretells another kind of better and more important life, there is a lot of foolishness, overall powerlessness, sorrow and comic of a turkey bird singing the swan song, space of power and authority and exhaustion and disappointment. Radmila Živković will remain remembered in the role of a cabinet minister’s wife as an actress who seriously and even dramatically understood Živka’s plight and who never deprived Živka’s rise and fall from comedy of a higher order, the comedy which arises from the overall powerlessness to change things really and everlastingly inside and around her. Who would have expected this! Dara is just being herself! What should one act and play with? However, Olga Odanović didn’t think so. Her interpretation of Dara will be remembered the same way as previous “unsurpassed cabinet minister’s wives” are. Silent, over the top, crazy, then in the next moment normal, a realistic mad woman, unpredictable… the real comic abundance is shown in the character of Dara in the interpretation of Olga Odanović. The fact that Rista Todorović is a dark and silent man, instead of a chubby and talkative one, does not make much difference. Jagoš Marković made numerous relatives younger without any deeper director’s and actor’s variations and innovations. Even when one sits in a high place, one still sits on a particular part of the body. This is the practical and comically reduced dr. Ninković interpreted by Boris Komnenić. Rade Marković interprets Pera, the notary, with moving dedication. Costumes designed by Božana Jovanović undoubtedly indicate a small town spirit/soul from the Nušić’s comedy. Jagoš Marković’s production does not suffer from boring perfection, but it is powerful, dynamic, full with tragicomic energy, more or less unified with vision of the world between harsh reality and sorrowful invocations “away go my wonderful dreams…” This is a performance to talk about, to comment on and, hopefully, the one which will have a long and beautiful theatre life.