THE NIGHT WRITERwritten and directed by Jan Fabre 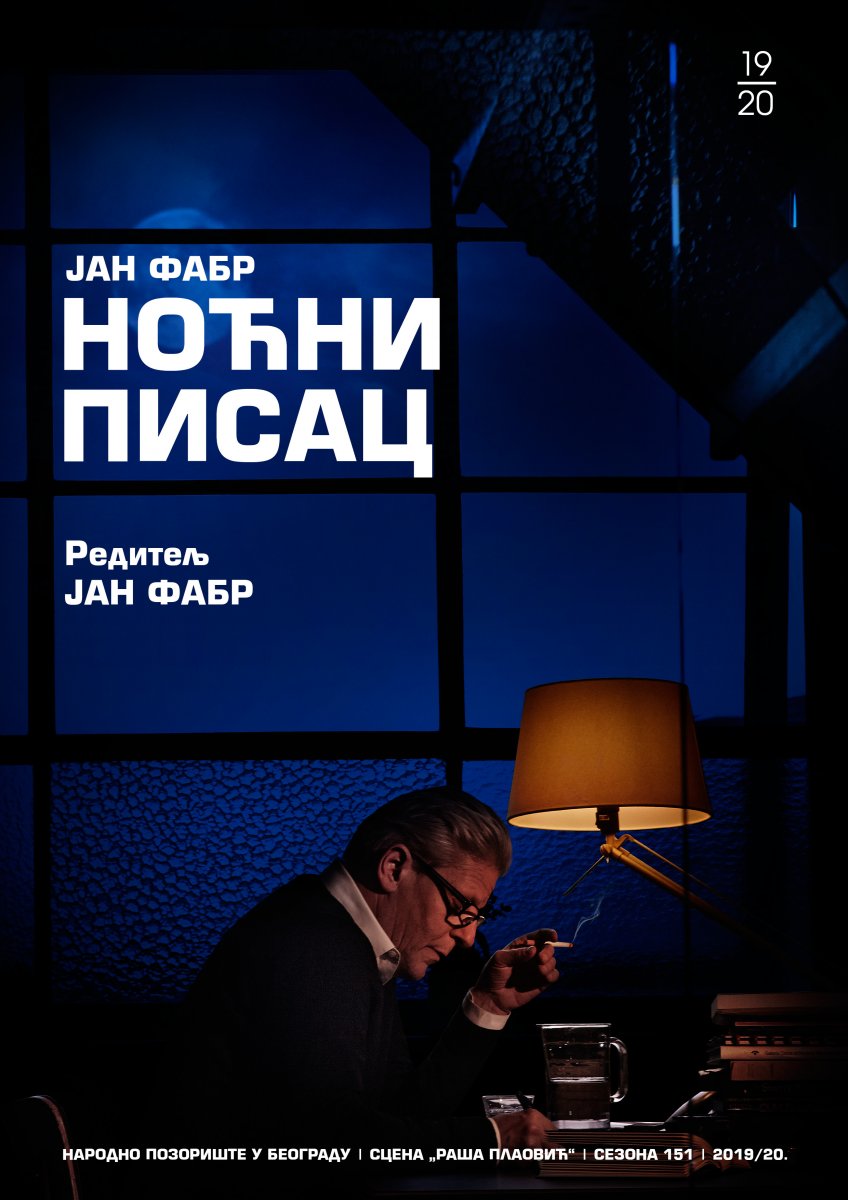 THE NIGHT WRITER  is a visionary and disarming hymn to the subversive and intriguing artist Jan Fabre. His personal diaries feed into an intimate and provocative autobiography. (Name actor)  brings in The Night Writer Jan Fabre’s unique world of ideas to life and performs his texts on stage. It is an excellent opportunity to discover Fabre’s intriguing Night Diaries as well as his poetic (theatre) texts. Instead of introducing the audience to the visual artist or the theatre maker, The Night Writer concentrates on an aspect of Fabre that has remained in the shadows: his texts. Like his drawings, Fabre’s texts reflect his intimate experiences, his recurring desires, ideas and obsessions. They are frequently written in the night-time hours, when all is silent and solitude sets in, in his very own, original language. They open the door to a world full of fantasy and surprising insights. It’s a journey in strong colours, from the artist’s youth to today. The audience will be engulfed in a flow of thoughts connecting day-time activities, bubbling with irresistible ideas and ambitious projects, and night-time existence, when creativity merges with fury and reflections on life, love and sex speak of the visceral energy of the body. “To read the diary is to discover the multiple, contradictory and intriguing sides of Jan Fabre, who reveals himself sometimes visionary, sometimes disarming and shrewd, sometimes prickly and moving, provocative and hesitant, subversive and proud of his Flemish figurative tradition. (…) And then an obvious and significant discrepancy emerges between the artist’s life during the day, rich in impressions, sensations, work, performances, exhibitions, projects and his life at night, possibly even more intense - intimate, lacerating, overwhelming, full of creative fury, now meditative, now “sanguine”. The affirmation of limitless curiosity and of inexhaustible energy, revolving in these pages around the role of the body, a body that is both spiritual and material, cultural and visceral, a place of thought but also of blood, urine, sperm, nucleus of the eternal flow of birth-death-rebirth. (…) A portrait deep red and engaging.” Franco Paris

...The staging is balanced, rhythmic and sober: A table on wooden trestles with a package of Belga on the glass top - designed by René Magritte, I find out - a carafe of water and a glass; the floor sprinkled with salt crystals. The soft and limited lighting of this functional whole - a shadow play through reflection in a glass table - creates an intimate atmosphere. The functional, subtle music of Stef Kamil Carlens also contributes to this…
… The spectator, even without having seen anything of Fabre’s plays before, becomes part of a very strong theater experience.
Fabre’s lyrics are full of humor, they are funny without being frivolous or ironic, they are absurd without being meaningless, they are fun and at the same time very serious. That is the magic of the work of this Warrior of Beauty, he succeeds in bringing the necessity and the pleasure together. I sat around the mouth with a smile on my face, sometimes I even had to laugh out loud…
… Fabre’s work and the conception of art that radiates from it, are contagious, inspire, ignite the fire in you….”
Liesbeth D’Hoker in Literature & Theater, November 2016 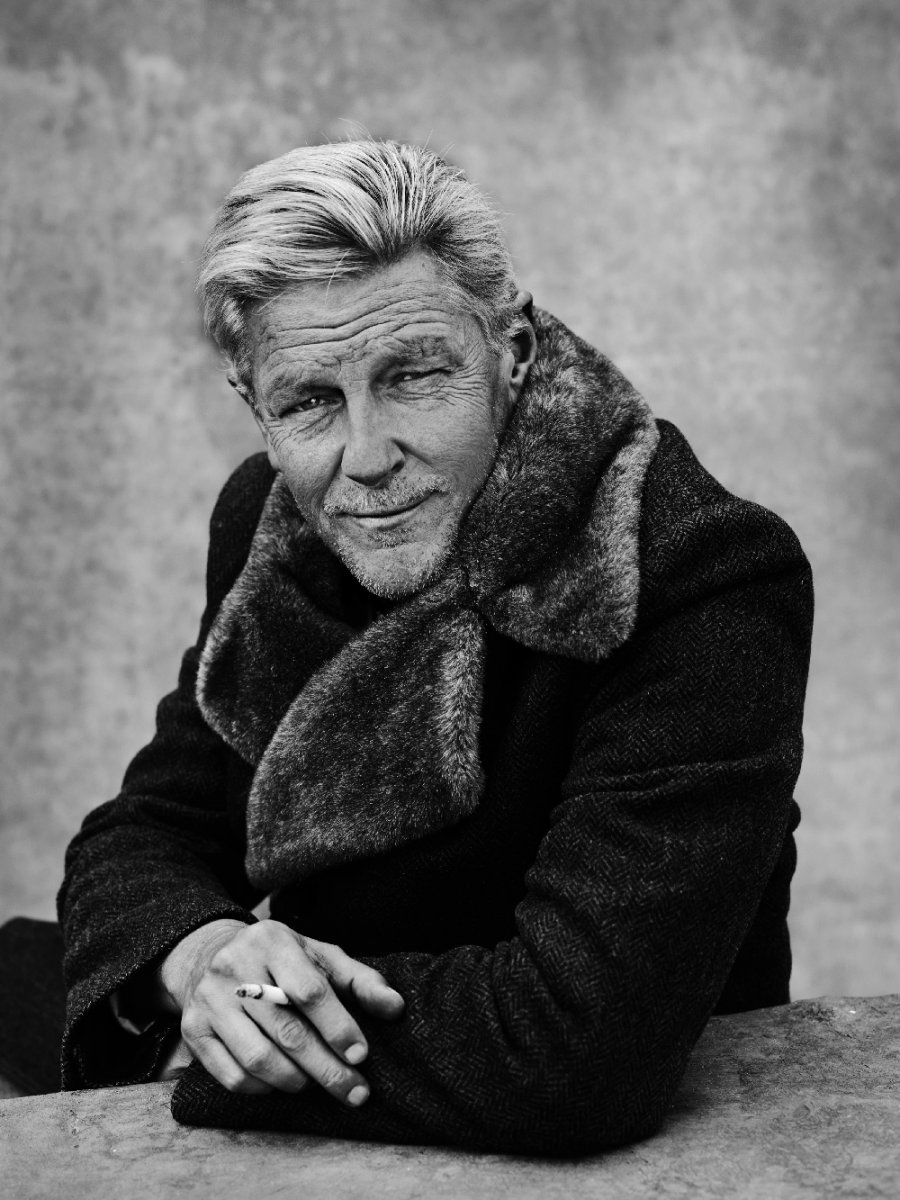 JAN FABRE (Antwerp, 1958) is considered one of the most innovative and versatile artists of his days. Over the past 30 years, he has produced works as a visual artist, theatre maker and author. In the late 1970s, the young Jan Fabre caused a sensation as a performance artist. In 1982, the work This is theatre like it was to be expected and foreseen and two years later The power of theatrical madness challenged the foundations of the European theatre establishment. Chaos and discipline, repetition and madness, metamorphosis and the anonymous are indispensable ingredients in Fabre’s theatre. The body in all its forms has always been a central object of his research. Productions such as Je suis sang, Angel of Death, Quando l’uomo principale è una donna, Orgy of Tolerance, Preparatio Mortis and Prometheus-Landscape II have earned Fabre international acclaim. In 2005, Jan Fabre was artiste associé of the Festival d’Avignon. He then created Histoire des Larmes for the Cour d’honneur, where he had already performed Je suis sang in 2001. In 2007, Jan Fabre created Requiem für eine Metamorphose for the Felsenreitschule of Salzburg. His latest performances were the impressive Mount Olympus. To Glorify the Cult of Tragedy. A 24-hour performance and Belgian Rules/Belgium Rules. As an author, he has written several theatre texts that were translated worldwide, including We need heroes now, Another sleepy dusty delta day, I am a mistake, the King of Plagiarism, Etant donnés... For Mount Olympus he wrote several texts about sleep and dreams: Remnants. Over the years, Jan Fabre has also built up an exceptional oeuvre as a visual artist. He has become well known to a wide audience with the Tivoli castle (1990), Heaven of Delight (2002), in which the ceiling of the Mirror Room at the Royal Palace in Brussels is drawn with jewel beetle wing-shields, his open-air sculptures, including The man who measures the clouds (1998), Searching for Utopia (2003) and Totem (2000-2004). Key solo exhibitions by this Belgian artist include: From the Cellar to the Attic - From the Feet to the Brain (Kunsthaus Bregenz, 2008; Venice Biennale, 2009), The Hour Blue (Kunsthistorische Museum Vienna, 2011), Pietas (Venice Biennale, 2011) and Stigmata. Actions and Performances 1976 – 2013 (MAXXI, Rome, 2013; M HKA, Antwerp, 2015; Lyon, 2016; Leopoldmuseum, Vienna, 2017; CAAC, Sevilla, 2018). Jan Fabre was the first living artist to present his work at the Louvre, Paris (L’Ange de la metamorphose, 2008). He was invited by the State Hermitage Museum in St-Petersburg to create a large-scale exhibition in 2016.That same year, Jan Fabre presented Spiritual Guards at three historical sites in Florence. In 2018, Fabre presented his research to date on the brain at the Fondation Maeght and exhibited a challenging selection of new and rarely seen works of art during Jan Fabre. Ecstasy & Oracles’ (Monreale – Agrigento, Sicily). Among recent projects we can mention Oro Rosso, Gold and coral sculptures, blood drawings, which opened in 2019 on several locations in Naples and The Man Who Measures The Clouds (Monument to the Measure of the Immeasurable) in Venice, installed in the Garden of Palazzo Balbi Valier and visible from the Grand Canal.