THE POWER OF DARKNESSdrama by Lev Nikolayevich Tolstoy 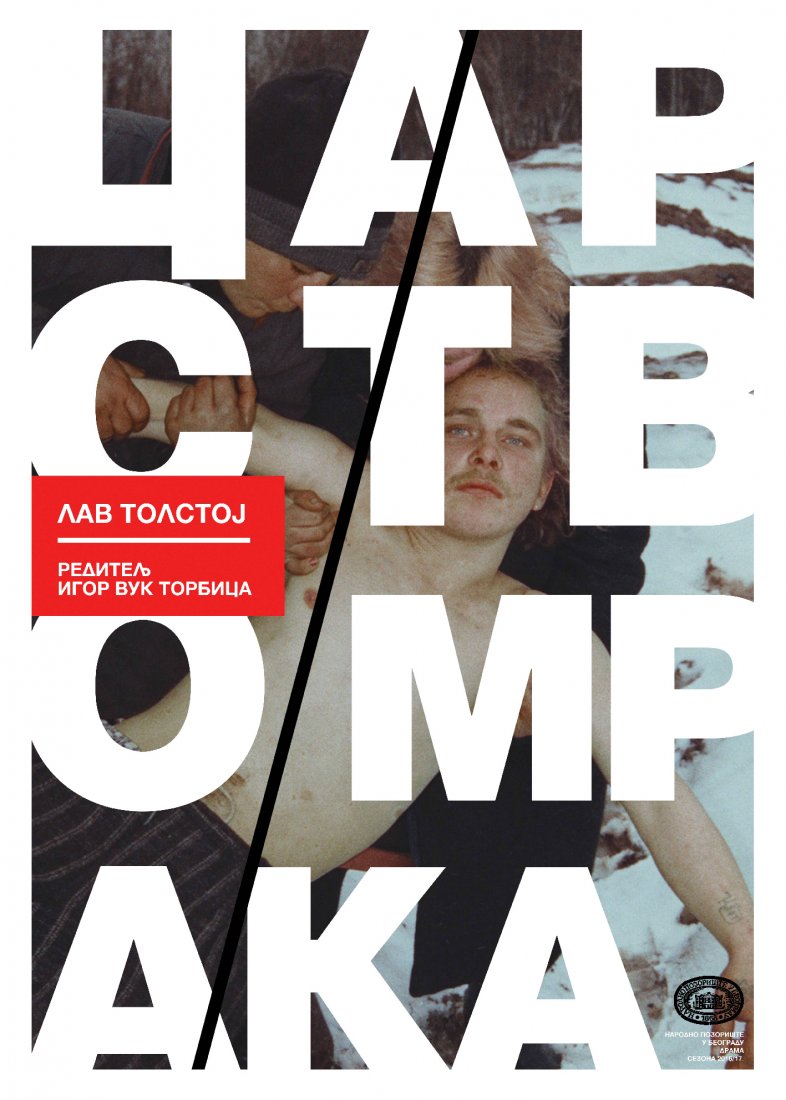 TOLSTOY AS A PLAYWRIGHT
It is known that Tolstoy bitterly opposed the art of upper classes, especially in the West, in his works on aesthetics, and supported didactic art intended for masses. Among other things, this is why he considered drama the most efficient literary device and was very interested in theatre. Even at the very beginning of his literary career, Tolstoy attempted writing comedies. Several fragments from his early comedies were found, some were written in two or more versions. In his first playwriting attempts, Tolstoy displays everyday life of upper class and disintegration of noble families. His attitude towards drama is connected with a change in his personal set of ideals and opinion of the world when he saw the fatal outcome of numerous and tragic social incongruities of the time. Tolstoy thought that communal theatre had great importance and that is why he protested because of the low level of performances given in fairs and other popular events. Since he supported protection of peasants in the 1880s, he wrote several plays for communal theatres together with short stories intended for common people. His comedy against drinking, A Leading Drunkard, or How the Little Devil Earned a Crust of Bread, was very successful. The play was staged on a stage at the Saint Petersburg Porcelain Factory in 1886, but it was soon forbidden by censorship. By taking into account requests from viewers who belonged to common people, Tolstoy wrote his plays with special attention by dividing them into short scenes, frequently changing the place of the plot, incessantly trying to make the plot vivid and interesting, and enriching them with stage effects. Tolstoy wrote The Power of Darkness to be performed in communal theatres. However, complexity of the play does not allow it to be treated as distinctly educational and particularly simplified play. Tolstoy wrote the play in 1886, but the play had its first premiere only in 1895 on stage of the Literary and Artistic Society Theatre in Saint Petersburg, followed by premieres in the Aleksandrinsky Theatre and the Small Theatre in Moscow the same year. Golden opus of Leo Tolstoy’s dramaturgical heritage comprises of The Power of Darkness, together with comedy The Fruits of Enlightenment, in which he ridicules parasitism of upper class, and drama The Living Corpse, in which he portrays a slightly changed actual event and argues issues of marriage and love: the three plays have been most frequently staged in Russia and on most renowned stages throughout the world.

A Note by the Dramaturgе
Several years before Lev Nikolayevich Tolstoy wrote The Power of Darkness, there was a case of a man, somewhere deep in Russia, who confessed publicly to all his crimes on the day of his daughter’s wedding and asked for redemption for all his sins. As Tolstoy wrote in his journal, he started writing The Power of Darkness in 1885 inspired by this event. Nonetheless, if we keep in mind the inspiration for the play and its title, it is no wonder that the play was forbidden in Russia until 1902, until the playwright conceded to write alternation for the most terrible and horrifying scenes from the play. When he wrote about art, Tolstoy found its goal and purpose in the transfer of emotion and found it the means of communication between two persons – the one who experiences something, thus carrying an emotion within himself, and the one who observes it, thus receiving certain impulses and starting to feel something himself. However, as Tolstoy claimed, it is a mistake to think that the task of art is to transfer only positive emotions and give pleasant feelings of contentment to a viewer. On the contrary, Tolstoy says that emotions with which the art should “infect” its observer can be most diverse – starting from strong and weak ones, then very gracious or very base (undignified) ones, to very good and very bad ones, because all (and the framework cannot be any wider than that) belong to art. One can anticipate from the title itself what kind of feeling this play intends to present to people and bring about in them. The Power of Darkness seemingly presents a deeply religious story about a man who lost his path – Nikita, a young serf on a Russian countryside estate, who keeps committing sin after sin as the plot thickens. Subtitle of the play is If a Claw Is Caught the (Whole) Bird Is Lost and for Nikita, it is only a matter of time when everything around him will be lost. Tolstoy does not search for psychological explanations for actions of his characters, nor gives a lot of effort to suppose that maybe each and every one of us may have the same capability for this sort of travesty, on the contrary, it seems that he blames the profound poverty his characters come from and live in for their personalities. Although Nikita is put in the central place in Tolstoy’s play, it is unavoidable to mention female characters in the play, who, as the playwright positions them, actually initiate all the evil that takes place and develops in their empire of darkness. However, regardless of the fact that Tolstoy quite particularly gives a chance for redemption only to men, while for women (who are for him, in this case, the cause of evil) such a thing is not possible; this text, however, provides sufficient proof that all these people who live in an empire of darkness are dark themselves and all are capable to do the worse humanly possible things. In such a drama structure, full of dramatic events and tension that keeps increasing while speeding towards redemption, there is no place for big discussions, improvement of characters, or any kind of ambiguity – Tolstoy gives most of the space to development of immorality and evil in his characters. Darkness and morbidity portrayed by Tolstoy in this play, have given us an excellent ground to research how they should be staged, thus making us aware that it may (and should) be even darker than the text itself. It is very rare that people in theatre audience find themselves in a situation that, while watching a performance, they remain without a single character with whom they can connect and identify. It is also rare that an audience has not been given a clear distinction between good and bad, and by doing so they do not have an opportunity to choose easily the side, and it is rare as well to have a theatre audience face so much violence and evil that prevails in scenes.  This is exactly where all of us who created this production saw the opportunity to fulfil our wish to make the audience face the circumstances and people who, as a rule, are invisible.

IGOR VUK TORBICA
Igor Vuk Torbica graduated from the Department of Theatre and Radio Directing at the Faculty of Dramatic Arts in Belgrade, in Professor Alisa Stojanović’s class in 2013. He is currently doing his doctoral studies, and works as an associate expert at the Theatre Directing course at the Faculty of Dramatic Arts. He has worked as an assistant director with Dino Mustafić (Born in YU, Yugoslav Drama Theatre and Patriotic Hypermarket, Bitef Theatre), Sonja Vukičević (The Patriots, Serbian National Theatre) and Ana Djordjević (The Fourteenth, National Theatre of Republic Srpska). He directed Don Juan by Molière (National Theatre Toša Jovanović) and Heinrich von Kleist’s The Broken Jug at the Yugoslav Drama Theatre. He was the laureate of the “Hugo Klajn” Award for best theatre directing student of his generation. The production of The Deceased, produced as an examination exercise in his third year of studies, received the main prize at the festival Studio Fest, and became part of the Yugoslav Drama Theatre's repertoire. It was named best production at the Nušić Days Festival in Smederevo. At the  Yugoslav Theatre Festival „Without Translation“ in Užice in 2016, Torbica won the „Ardalion“ Award for best stage directing – for his staging of Hinkemann by Ernst Toller, performed by the Zagreb Youth Theatre, which was assessed both by the jury and audience the best performance at the festival. The same production won the Award of the Croatian Theatre for Best Drama Performance.

THE POWER OF DARKNESS ON THE NATIONAL THEATRE'S STAGE
First premiere of The Power of Darkness, on 18th December 1904, was Belgrade audience’s first encounter with Leo Nikolayevich Tolstoy. The play was translated by Jovan Maksimović, and the production was staged by Čiča Ilija Stanojević. The production was performed seven times before the First World War. One of the performances took place in September 1908, on occasion of Tolstoy’s 80th birthday. In the performance in January 1910, a touring member of the Croatian National Theatre, M. Mihičić, interpreted the role of Anisya. Upon this performance, the critics praised the Croatian actress, but they resented the interpretations of Belgrade actors who, according to them “acted poorly” and commented that the stage directing “was of no value”.  The last performance of the first staging of The Power of Darkness was given immediately upon the writer’s death, on 7th December 1910, when the translator of the play, Jovan Maksimović, gave a lecture on Tolstoy. The following premiere of this grim play on the National Theatre’s stage took place on occasion of a centennial of Tolstoy’s birth, on 15th September 1928. The same translation was used, but the production was stage directed by Yuri Lvovich Rakitin, a Russian engaged by the National Theatre at the time. According to the critics, the set was “one of the most beautiful ones” created by Verbitsky and the performance was “solid and pure”. The director staged the play realistically, which some critics liked and some did not, but all admitted that he depicted “the atmosphere of a primitive and criminal milieu” successfully. However, the critics seem to be unanimous when the period for preparation of the play is concerned; they all found it too short for this sort of play, which could be noticed especially in acting, so the benevolent ones stated that the roles (“each role is virtuoso”) were sketched well, but lacked nuances. There were comments that some of the interpretations were done similarly to peasant roles in our plays; however, others have succeeded, with the director’s assistance, to portray the spirit of Russia. This staging of The Power of Darkness remained on the repertory only until the end of the season and had 4 performances. Until now, that was the last occasion that this Tolstoy’s play was performed on stage of the National Theatre in Belgrade.