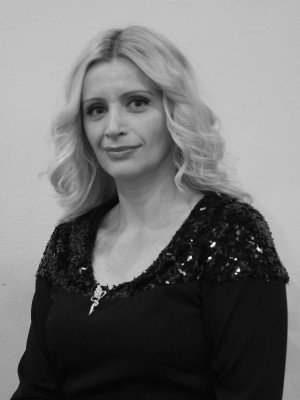 Nataša Radovanović was born in Belgrade in 1974. She graduated from “Kosta Manojlović” High School of Music in Zemun – Major in Solo Singing, Secondary Pedagogical School for Teachers and the Faculty of Dramatic Arts in Belgrade, Department of Theatre and Radio Production.

She has been employed by the National Theatre since 2000, as a member of the choir ensemble.

Since that year, she has played the roles in plays produced by Zvezdara Theatre, the Yugoslav Drama Theatre and Madlenianum, in dramas and musicals.

Along with her theatrical engagement, she is also engaged in jazz and tango music, as a vocal soloist of the ensemble Libercuatro, with which she actively performs at festivals in the country and in the region.

She is the author and performer at the concert program Music in Moving Pictures, with which she travelled across Serbia in 2017, under the auspices of the Ministry of Culture.

She is happy to work and often works with children and for children at concerts, she sings and does cartoons.

She lives and works in Belgrade, and is the mother of Nadja, Mihajlo and Nina.