Artistic director of the Opera 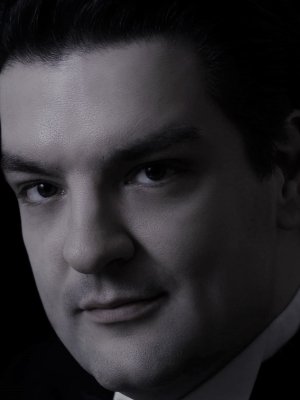 Mr. Mijailović was born in Belgrade, Serbia in 1973.

After taking a diploma in piano, he continued vocal studies at the University of Arts with his mother, a renowned Serbian soprano Radmila Smiljanić.

He also participated in Music Academy of the West in Santa Barbara, CA and young artist programme at Opera Bastille in Paris.

He completed his studies at Academia di perfezionamento per cantanti lirici del Teatro alla Scala in Milano in 1999.

Nikola Mijailović made his professional debut at the Bolshoi Theatre in Moscow as Schaunard in Boheme in 1996, and sang Marcello next to Luciano Pavarotti’s Rodolfo the same year in Academy of Music in Philadelphia.

His repertoire include around 40 major operatic roles such as Rigoletto, Jago, Barone Scarpia, Eugen Onegin, Escamillo, Enrico, Belcore, Prigioniero, Macbeth, Posa among others. He has also appeared in concert performances of Carmina Burana, The Bells by Rachmaninoff, Messa di Gloria by Puccini, Lieder eines fahrenden Gesellen by Mahler and Dichterliebe by Schumann.