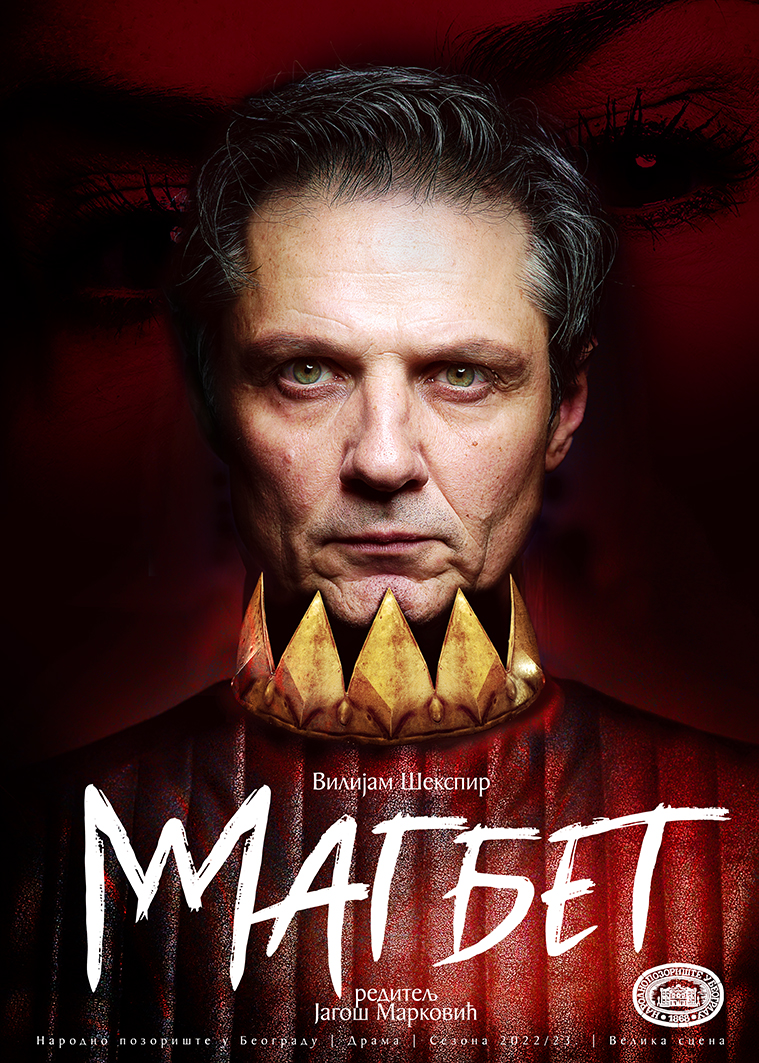 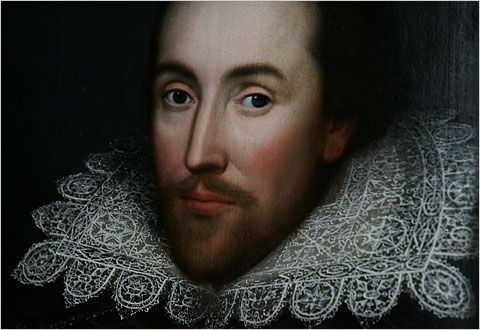 William Shakespeare was probably born on April 23, 24, 25 or 26, 1564 in Stratford-upon-Avon. He was the third child and the first son of John, a craftsman, and Mary Arden, who probably came from a distinguished landowning family. At the age of eighteen, in 1582, he married Anne Hathaway, who was eight years his senior, and six months later their daughter Susanna was born, and the twins, Hamnet and Judith, came two and a half years later. Hamnet died at the age of eleven in Stratford.
The name William Shakespeare appears in 1595 on a list of actors paid £20 each to perform two plays at court, before the Queen. In 1597 Shakespeare bought a house, the second largest in Stratford-upon-Avon, and lived in London probably until 1610. He played the leading roles in Ben Jonson’s plays “Every Man in his Humour” (1598) and “Sejanus His Fall” (1603). Since 1599 Shakespeare held a share, sometimes as owner, sometimes as lessee, in the Globe Theatre. In 1604, he participated as chamberlain in the procession at King James’ coronation. His name began to appear more and more on lists of tax evaders and in court files, both as plaintiff and defendant. Most of the trials he was a party to were related to financial conflicts. Shakespeare continued to acquire real estate and land in London, and especially in Stratford.
He died on April 23, 1616 and was buried two days later. He bequeathed the bulk of his large estate to his daughter Susanna, and to his wife only the much-mentioned “the second best bed” and bedding. There was no mention of books or manuscripts in his estate. He left no written records of himself, which only shows that in his time the playwrights did not enjoy a great social reputation and even stronger demonstrates that his contemporaries were unaware of his genius, nor was he aware of it.
Today, Shakespeare is considered one of the greatest geniuses in the history of dramatic literature, and is probably the most produced playwright. He wrote 38 plays, 154 sonnets and numerous poems. The vocabulary he used to write his works contains about 20,000 words. No other writer or dramatist in English history possessed such a voluminous vocabulary. Despite centuries of research, we still do not know much about Shakespeare. Probably the most used word in his biographies is the word “probably”.
Prepared by Molina Fotez

Jagoš Marković (Podgorica, 1966) is one of the most renowned stage directors in our country and in the region. He graduated from the Faculty of Dramatic Arts in Belgrade (1987) mentored by professors Borjana Prodanović and Svetozar Rapajić. In the National Theatre in Belgrade, where he has been a stage director since 2008, he has directed major works of world and national literature, The Learned Women, Hasan-Aga’s Wife, Mrs. Cabinet Minister’s Wife, The Upstart, PhD, Antigone, Cinderella (opera) and The Marriage of Figaro (opera). As a rule, his productions are very popular, they remain on the repertoire for a long time, receive positive reviews and represent the National Theatre on international tours. Furthermore, Marković has directed over fifty plays in other theatres in the country, as well as abroad. Some of his productions are Romeo and Juliet, Kate Kapuralica, Decameron, a Day Before (National Theatre Sombor), Skup, The Twelfth Night, Telephone Booth, Suspicious Person, The Imaginary Invalid, Right You Are If You Think So (Yugoslav Drama Theatre), Family Stories, The Glembays, Autumn Sonata (Theatre Atelier 212), The Seagull, Filumena Marturano and opera Carmen (CNT Ivan pl. Zajc), Lukrecija o bimo rekli Požeruh (Rijeka Summer Nights), The Learned Women (CNT Split), The Hundred Loop Stocking (Belgrade Drama Theatre), Dawn in the East, Our Sons, Pig’s Father (Zvezdara Theatre), Hasan-Aga’s Wife (Tivat Culture Centre), Tartuffe, Hecuba (Montenegrin National Theatre), etc.
After the break-up of Yugoslavia, he was the first stage director from this country who participated in the Dubrovnik Summer Festival (Romeo and Juliet, 2014). As a stage director, Marković won about fifty awards from his peers, as well as festival and state awards, including “Bojan Stupica” Award, Belgrade Liberation Award, “July 13th” Award, “Mića Popović” Award,  Award for his overall contribution to art in Montenegro, Award of the City of Belgrade, Award of the City of Podgorica, “Sterija” Awards, several “Zlatni ćuran” and “Ardalion” awards, etc.  At the Festival “Balkans Is Reading Jagoš” in Bulgaria, Jagoš Marković’s play The Telephone Booth was staged by several directors.  When Ljubomir Simović presented Jagoš the “Mića Popović” Award in June 2004, he said the following about him as an artist, “When staging a play, Jagoš always sees something that no one has seen before. He makes even the old and already known things seem new and unknown. He makes a discrete gesture, but that gesture changes everything… Jagoš changes the metaphors from the original text radically, with great courage. However, he does not do that only as a director, for he is not only a director in the theatre. In fact, he is everything in the theatre: he is an actor and a whole ensemble, he is the audience, the stage and the theatre box, the first, the second and the third gallery, he is the theatre library, he is the brush and the paint, the hammer and the nail, the ropes and the lights, the silk and the fire, the sets and the curtain. He is all of that probably to show us that the world without love is only a dry, salty and barren sea floor, which is what Apostle Paul.

How to play the tragedy of Macbeth today? Who is he and who is his lady? First of all, like all of us, they are human beings. He and She. She and He. And the immutability of human, earthly nature. And the riotousness of the human mind. And the frenzy of human will. And the three weird sisters, whom they call witches. Alas, if only the hero had not met them while returning home from the battle! How did he summon them while fearlessly fighting a battle? Three weird sisters, whom they call witches. And they told him the truth. And he heard them, but only as far as he could fathom what he was told confined by the boundaries of his human, earthly nature. A tumultuous mind cannot accept the Force. The self must be abandoned in the presence of Knowledge. She greets him at home. She loves him. Her will is her everything... She will stand by him until the end of her worldly self, until she loses her reason in all her frenzy. Not one of them can see that there is a path to freedom...He is aware that powerful forces have possessed him and that his worldly “power” is unable to fight it. And yet, he does not renounce it, and until his last blink, he lets it show its strength. He understands that he is only human and that as long as he is in this world he has to serve that human, earthly nature and he is unable to rise above it. He knows that this weakness is his doom and yet he agrees not to seek a different path in this world.
After catharsis, the path of Light is open…

For centuries, the clans had been waging war on each other. Viking warriors had been raiding the coasts of Scotland. King Malcolm of Scotia, king of the Scots and Picts, routed the Angles of Lothian in the Battle of Carham in 1018 and became the most powerful man in Scotland. When King Owen of the Britons died later that year without issue, Duncan (Malcolm’s grandson) became the rightful heir through marriage. Malcolm was therefore able to unite the Four Kingdoms of Scotland under one throne. Scotland in the early 11th century had finally become a single nation.
Duncan – King of Scotland 1034 – 40
DuncanDuncan became King of Scotland upon the death of Malcolm in 1034. He was a much weaker character than Malcolm and a terrible leader. He led a disastrous campaign into Northumbria and was forced to retreat ignominiously back to Scotland. His cousin MacBeth, chief of the northern Scots, also had a claim to the throne through his mother. MacBeth formed an alliance with his cousin the Earl of Orkney, and they defeated and killed Duncan near Elgin in 1040.
MacBeth – King of Scotland 1040 – 57
MacbethMac Bethad mac Findláich or MacBeth as he is known in English, the Mormaer of Moray, claimed the throne on his own behalf and that of his wife Grauch, and after the death of Duncan made himself king in his place. Respected for his strong leadership qualities, MacBeth was a wise king who ruled successfully for 17 years. He lived in a fortified castle at Dunsinane north of Perth. His rule was secure enough for him to go on a pilgrimage to Rome in 1050. However the peace was not to last: Duncan’s son Malcolm had fled to Northumbria after the defeat of his father and had never given up his claim to the throne. In 1054 with the support of Earl Siward, he led an army against MacBeth, defeating him at the battle of Dunsinnan. MacBeth remained king, restoring Malcolm’s lands to him. But in 1057 at Lumphanan in Aberdeenshire on 15th August, MacBeth was finally defeated and killed and Malcolm became King.
Shakespeare’s ‘Macbeth’
It is generally accepted that Shakespeare wrote the play sometime between 1604 and 1606, when there was a new king on the throne, King James I and VI of Scotland. Shakespeare would have gained approval for a Scottish play from the new King. Especially one with witches in it, for it was well known that the King was interested in witches, witchcraft and the supernatural (in 1597 James had written a book on spirits and witchcraft called ‘Daemononlogie’).
Shakespeare appears to deliberately mix fact and fiction in the play. Apparently using Holinshed’s ‘Chronicles of England, Scotland and Ireland’ (1587) as his source, Shakespeare sets the battle between Duncan and MacBeth in 1040 at Birnam Hill in Perthshire, rather than near Elgin where it actually took place. In the play MacBeth dies at Dunsinane whereas in reality it was at Lumphanan where he was defeated and killed in 1057.
Shakespeare’s play takes place over a year whereas in reality, MacBeth ruled for 17 years.
As for the personalities of the two main characters, Duncan and MacBeth, again Shakespeare’s portrayal is not historically correct. In the play Duncan is portrayed as a strong, wise and elderly king whereas in reality he was a young, weak and ineffective ruler. Shakespeare’s Macbeth has virtually no legitimate claim to the throne whereas the real MacBeth had a respectable claim through his mother’s side – indeed both MacBeth and his wife were descended from Kenneth MacAlpin. Shakespeare also gives MacBeth the title ‘Thane of Glamis’ but in fact Glamis was not known as a thanage in the 11th century.
In Shakespeare’s play, MacBeth’s friend Banquo is shown as a noble and loyal man, resisting evil, a contrast to the character of Macbeth. In Holinshed’s ‘Chronicles’ however, Banquo is shown as exactly the opposite: he is an accomplice in MacBeth’s murder of Duncan.