On the occasion of closing the 152nd season of the National Theatre in Belgrade, on Thursday, July 1, a press conference was held at which the results achieved in the previous ten months were presented.

Before the press conference, General Manager Ivana Vujić, asked all the people present for a moment of silence to pay their respect to Andreja Maričić, a long-serving actor of the National Theatre and one of the art managers of “Borislav Popović” Opera Studio, who died the previous day in Belgrade, age 62.

A season titled “Together Again” started on August 29, 2020 by a joint ambient presentation of history and artists of the National Theatre – “A Spectator’s View Changes Everything”. The programme was performed at the balconies and on the platform in front of the main entrance with the participation of Drama, Opera and Ballet ensemble members, and also with guest artists from New York.

There were seven premieres at the National Theatre this season by all three theatre ensembles, whereas the eighth was planned for September and the ninth and tenth in October.

Due to its specificities and epidemiological situation in September and October 2020, Opera organised a large number of ambient concerts titled “Opera in Your Neighbourhood”, visiting various parts of Belgrade, while on its own stage during this season it hosted dozens of themed concerts and programmes complying with epidemiological measures. Opera Department had 35 different concert programmes that can be truly called premieres because they have never been performed before as such. The beginning of the season was marked by two major concerts with the entire ensemble, and throughout October concert performances were staged of the following operas – “Il Trovatore”, “La Traviata”, “The Love Potion (The Elixir of Love)” and “Manon Lescaut”. The orchestra also had solo performances with several programmes that premiered; Mozart’s sonata for wind octet, solo flute with orchestra, cello ensemble that performed solo as well as horn ensemble. A brass ensemble was formed and for the first time in Opera history an original programme was performed. The premiere concerts of our principal opera singers were staged – “The Hymn of Love” and “Dream”. We also had themed concerts featuring baroque, Mozart, Verdi, Puccini, two concerts of popular Neapolitan, Spanish and Russian songs, two major solo concerts of the Choir; the opera “La Traviata” was performed with 17 musicians; also, we had two concerts with scenes from several operas, and the Opera’s 100th anniversary was commemorated by organising a book promotion evening for the author Vladimir Jovanović. A large gala concert was also held in cooperation with the Austrian Forum “Va, pensiero…” conducted by Wolfgang Scheidt from Vienna who, during his ten-day visit to the National Theatre, also held a free master class for conductors. The choir also had two major concerts.

The opera studio, as a part of the Opera Department important for the future of our opera stage, had three concerts prepared by its students together with our artists – members of the studio management: Jadranka Jovanović, Sanja Kerkez, Đorđe Pavlović, Ivana Dragutinović Maričić. Furthermore, the students also participated in the opera “Orpheus and Eurydice”.

The National Theatre opened its third stage – ambient outdoor stage Yard – Workshop. Due to Covid 19 restrictions and epidemiological measures performance of theatre programmes outside theatre halls proved to be a good idea for the performers and for the audience alike, so therefore, the National Theatre put in use its ambient stage and performed the following programmes:

Due to Covid 19 pandemic and epidemiological measures many festivals were cancelled and actually it was not until June that festivals could resume their activities.

GUEST PERFORMANCES IN THE COUNTRY:

The National Theatre created a programme “National Theatre in Serbia” within its agenda. This programme should help uniform genre programmes reach and be performed in various regions in Serbia, particularly in Kosovo and Metohia. Due to Covid 19 and epidemiological situation the guest performances did not take place until June.

During the season the following guest performances took place:

September 2020:
“The Liar and the Archiliar”, a comedy by Jovan Sterija Popović, Cultural Centre in Čačak

November 2020:
“Dictionary of the Khazars – Dream Hunters”, a ballet based on the novel by Milorad Pavić, Madlenianum Opera and Theatre (Zemun)

THE NATIONAL THEATRE AND EPIDEMIOLOGICAL MEASURES

During the season 2020/2021 the National Theatre fully adhered to all epidemiological measures prescribed by the law of the Republic of Serbia, such as reducing the number of available seats for the audience, wearing face masks in theatre halls, wearing face masks in all rooms, hand disinfection and taking temperature when entering the National Theatre premises. The National Theatre also formed its Crisis Team that supervises the situation with Covid 19 among the Theatre employees and freelancers on a daily basis. It has to be stressed that the audience’s behaviour has been exemplary as they adhered to all epidemiological measures set forth by the Government and the Republic of Serbia Crisis Team.

THE NATIONAL THEATRE AND DIGITALISATION

In the upcoming period we are planning on creating a digitalisation studio in order to preserve all the material, musical scores, affiches, cast information and dramatic texts to make them available to all for further study. During this period the National Theatre used streaming technology to cover the Theatre events, and it is planned to digitalise the materials containing the shows given by the Drama, Opera and Ballet Departments thus improving their quality and preserving them to be studied by the generations to come.

EDUCATIONAL PROGRAMME FOR PROFESSIONALS AND THE AUDIENCE

The programme line of the National Theatre in Belgrade called the “Platform” deals with the education of professionals and the audience about theatre and with the audience development and related projects.

In the season 2020/2021 the second generation of Young Theatre Experts successfully completed this workshop programme. Over the entire year twenty young people had been meeting to participate in 18 workshops, analysing the shows they have seen live and also online during the state of emergency.

Within this programme the international project “Renaissance” was also implemented in cooperation with 22 European theatres during which the National Theatre presented its short film about the renaissance of European theatres to international cultural audience. Furthermore, during the season 2020/2021 nine work meetings were held with the representatives of the European Theatre Convention.

As a part of accompanying programmes to the play “Orlando”, in April, Biljana Dojčinović, a professor at the Faculty of Philology, gave a lecture titled “Virginia Woolf: Orlando and Its Interpretations” about the work of Virginia Woolf on “Raša Plaović” stage. The lecture was streamed online on the YouTube and Facebook pages of the National Theatre in Belgrade. The video footage of the lecture has over 700 views on YouTube.

Also, in May the first event took place within the programme “Interviews at the National Theatre” – interviews with the celebrated European director, Katie Mitchell, and the great Russian actor, Yevgeny Mironov. This event was also livestreamed on the Internet.

THE NATIONAL THEATRE ENCOURAGES THE WORK OF YOUNG ARTISTS:

Within the cooperation between the National Theatre and art faculties, during this season 22 student performances were given on “Raša Plaović” stage, and many young artists such as Iva Milanović, Bogdan Bogdanović, Nemanja Stamatović and Teodora Dragićević act in the National Theatre plays. Young composers Ana Krstajić and Jana Rančić and costume designer Suna Kažić were also engaged, and within “Francophonie and the National Theatre” programme public readings were held directed by the students of the Faculty of Dramatic Arts – Iva Olujić, Stefan Bundalo, Pavle Terzić and Ivona Riger. Tijana Grumić and Nemanja Novaković were featured as dramaturgs. A member of Opera Studio Jana Cvetković appeared in the role of Orpheus in “Orpheus and Eurydice”, and the play “The Caucasian Chalk Circle” prepared by the class of Marija Milenković was performed I February, March and April and presented the entire class of extraordinary young actors. “Platform” project brought together 45 young people from all over Serbia. High school students and senior years’ students of primary schools discussed and debated theatre issues online.

In 2020 the National Theatre Museum celebrated a jubilee – its 10th anniversary and to commemorate this event a suitable publication was issued. The Museum reopened on April 28, 2021 adhering to all the epidemiological measures.

The following exhibitions were staged:

From May 12 to 18 the National Theatre Museum participated in “Museum for 10” event, the largest national museum initiative in Serbia and a unique one in Europe, which has been organised for the seventh time this year under the auspice of the Ministry of Culture and Information of the Republic of Serbia. Several themed programmes were presented and the main event – the opening of “Vela Nigrinova – a Star and an Inspiration” exhibition, prepared by Vanja Kosanić, took place on May 15 in the Main Stage lobby.

OTHER EVENTS AND GUEST PERFORMANCES - selection 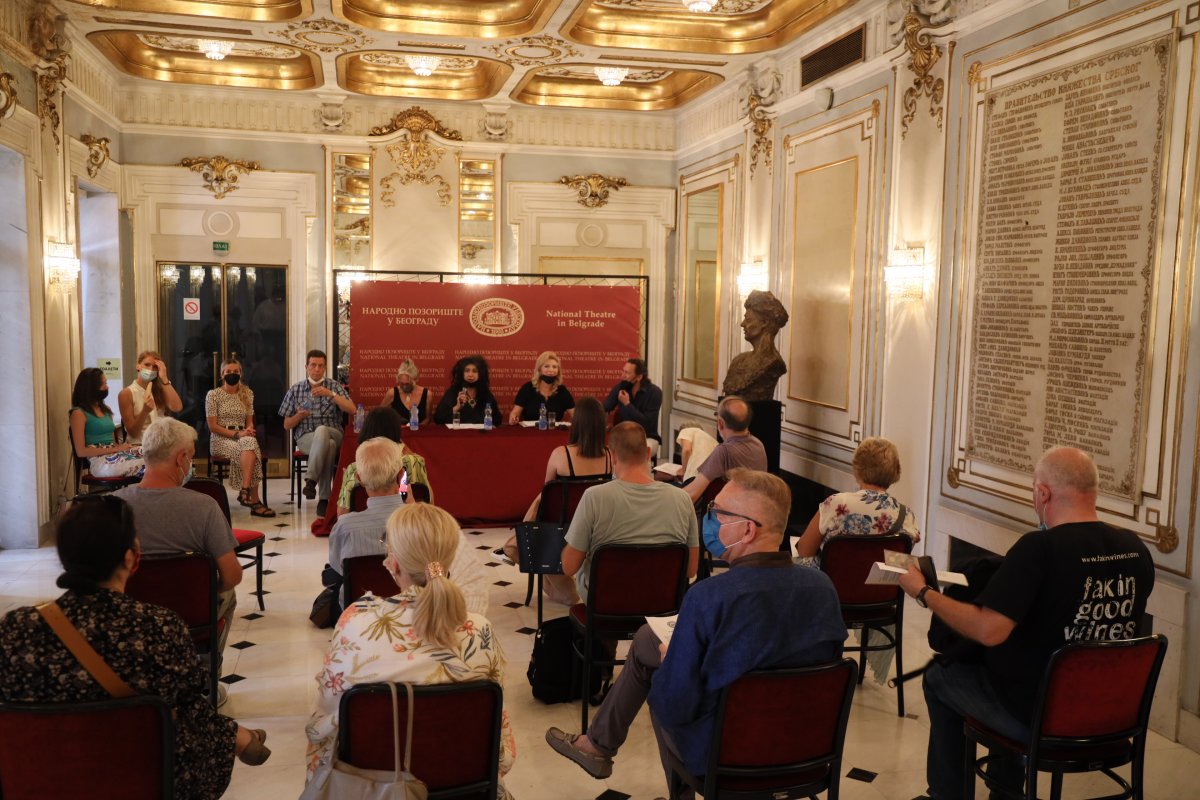 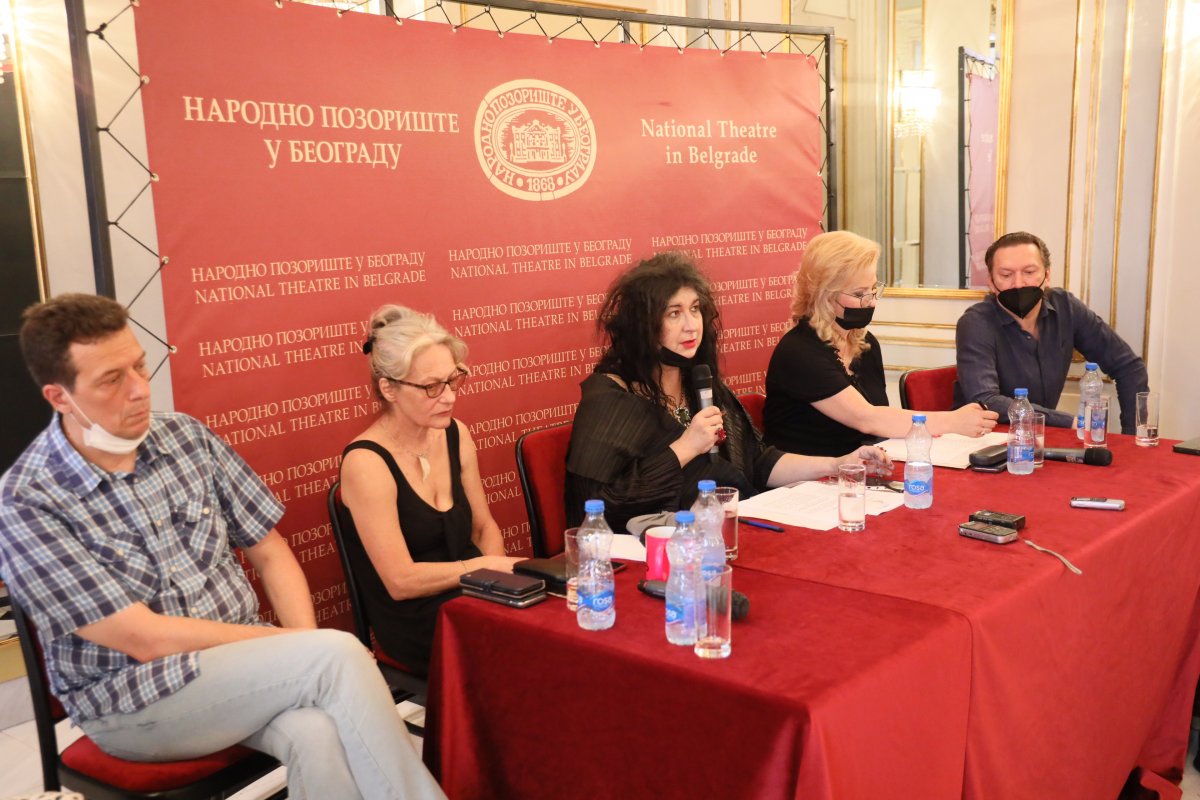