Premier Stage Actor of the National Theatre, Slobodan Beštić, Is an Absolute Winner of the 46th Monodrama and Pantomime Festival in Zemun 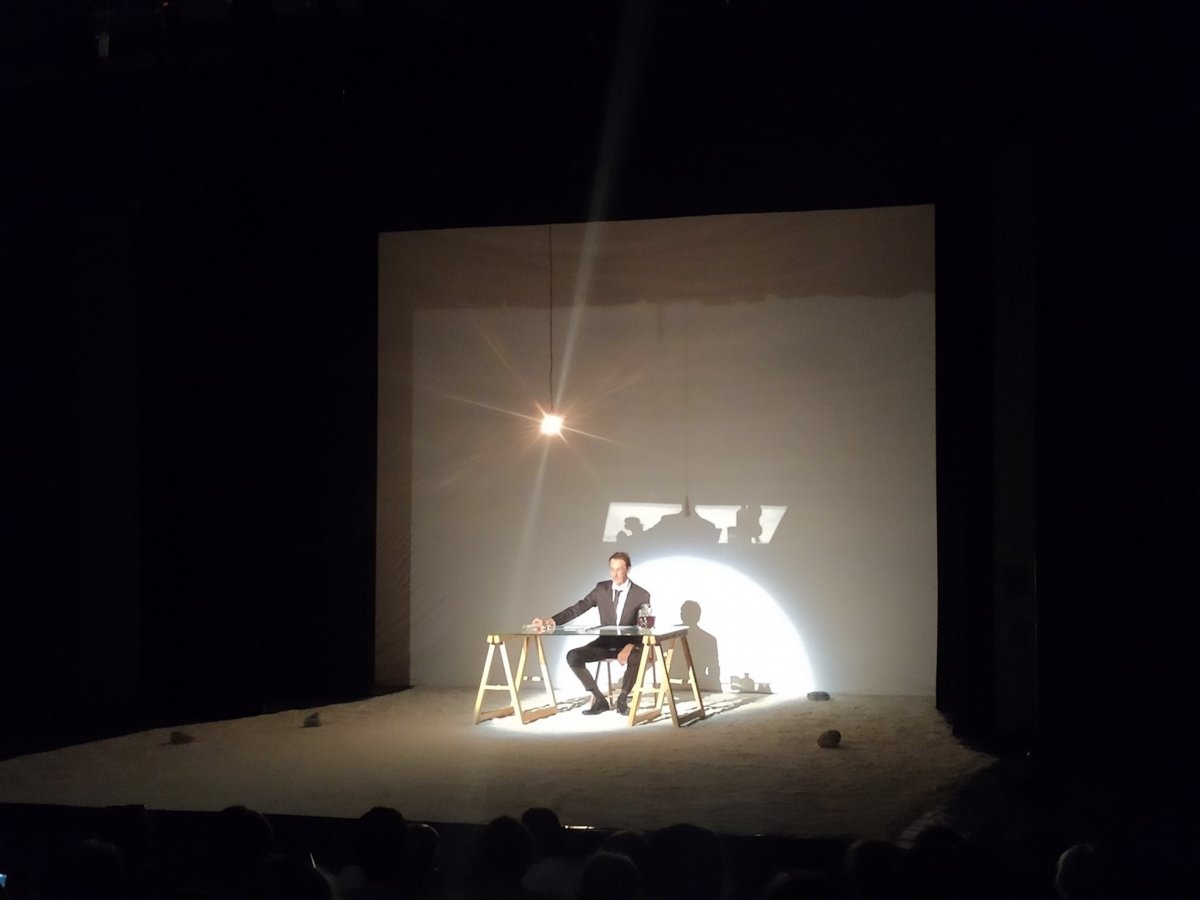 The absolute winner of the 46th Monodrama and Pantomime Festival in Zemun is the National Theatre premier stage actor Slobodan Beštić with the play “The Night Writer”, which is a project of Jan Fabre, a globally renowned, multimedia Belgium artist, and the National Theatre.
Beštić won both Festival awards – “Maja Dimitrijević” Golden Medal for monodrama awarded by the professional jury and “Siniša Dašić” Golden Medal Audience Award.

The Monodrama and Pantomime Festival is a special festivity that we have celebrated for 46 years, thanks to theatre devotees and organisers who shape it and the artists who nurture monodrama as a unique theatre form.
It is a great honour and responsibility to be a part of the jury. Art is not a competitive sport, so every award ceremony also tells something about those deciding about the awards. This year, we have seen seven entirely different monodramas in content, form, choice of artistic devices, and creative expression. We have seen artists of all generations on the stage: Petar Božović, Nikolina Vujević, Nataša Petrović, Boško Puletić, Jugoslav Krajnov, Marija Đajić, Slobodan Beštić… and together with the audience, we have enjoyed their spirited performances.
We are sad that this year there were no pantomime plays competing for the award, however, we hope that the 47th Festival will continue this tradition with full capacity as the International Monodrama and Pantomime Festival.

The jury of the 46th Monodrama and Pantomime Festival unanimously presented the “Maja Dimitrijević” Golden Medal to Slobodan Beštić for his fascinating and polyphonic performance in the play “The Night Writer” directed by Jan Fabre. Slobodan Beštić, the actor-seeker, bravely and uncompromisingly explores the stage expression of an actor, revealing the most intimate spaces of a contemporary artist such as Jan Fabre. Beštić moves through the infinity of the artistic expression that, for him, is a way to live his life on stage authentically, artistically and intellectually superior and beyond every cliché – time and time again. Beštić found in Fabre his director and Fabre found his actor, the stage ego and alter ego. In short, they found each other, and created a memorable play which is in the spirit of the modern stage expression.

With a unanimous vote, the audience’s jury declares that Slobodan Beštić won the first place for the monodrama “Night Writer” by Jan Fabre.
With his interpretation and artistic energy he surpassed all other contestants and took his monodrama right to the top of theatre artistry, which the audience rewarded with long applause. Therefore, Slobodan Baštić is the recipient of the “Siniša Dašić” Award as the best participant of the 46th Monodrama and Pantomime Festival in Zemun.
According to the audience jury vote, Nikolina Vujević, the author, director, and performer of the monodrama “Nina”, also attracted much attention from the viewers.
Furthermore, Jugoslav Krajnov and his monodrama “Tea with Kublai Khan” also received huge applause.
The jury stated that the audience was particularly delighted by Boško Puletić’s performance in the monodrama “Živojin Mišić”.
This year’s Festival was held from July 1 to 4 at the “Pinocchio” Theatre.